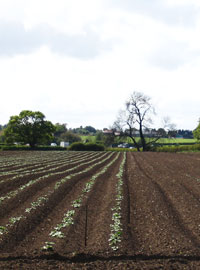 British potato plantings this year are likely to be the lowest for five years, according to figures in the Potato Council’s first crop estimate.

But crops were making slow progress due to the dry season and extensive irrigation was needed to aid bulking, the council’s latest report said. Some set skin crops for salads had been burnt off over the past week, and crisp processors were keen to use new-crop produce as soon as possible, but were being frustrated due to lack of size.

“In Cornwall, lifting of early processing Lady Rosetta under plastic will commence this week, with open fields not expected to be ready until July.” By 26 June, growers had lifted just 1194ha, with an average yield of 16t/ha, compared to 1597ha and 22t/ha at the same time last year.