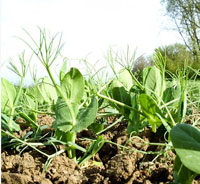 Marrowfat peas are proving to be a valuable spring break crop for Peterborough grower William Gee, returning margins almost on a par with oilseed rape.

His 61ha of Sakura marrowfat peas grown for seed under a contract this spring with Daltons Seeds fits in his crop rotation with extra nitrogen in the soil boosting yields in the following wheat crop.

Last year, his Sakura crop yielded around 4t/ha, selling at an average price of around £280/t.

“The gross margins for marrowfat peas can be on a par, or only slightly less than growing oilseed rape as a break crop,” he says.

“We are trying to avoid growing as many second wheats as possible to reduce disease pressure.”

Careful monitoring of crops and a robust spraying programme are important factors for growing a successful crop of marrowfat peas, he says.

This season, the land was ploughed in September in preparation for this year’s crop. Over the winter, the ploughed land was pressed to even out dry and wet patches. “We like to create an evenness of moisture in the seed-bed, which helps to establish an even crop.”

A Vaderstad drill will be used, at a rate of 280kg/ha, no earlier than mid-March.

“We want to make sure the seeds are drilled into a warm seed-bed to avoid fusarium footrot, which can appear in cold, damp conditions.”

After drilling, the land is rolled depending on conditions to aid harvesting.

Stomp (pendimethalin) and Centium (clomazone) will be applied at pre-emergence for the control of broadleaved weeds, followed up by an application of Troy (bentazone) and Tropotox (MCPB) at post-emergence.

Mr Gee says an application of Laser (cycloxydim) graminicide will be required post-emergence for the control of grassweeds. Then a foliar insecticide, such as Contest (alpha-cypermethrin), will likely be applied to control pea weevil.

Manganese will applied as a foliar spray to prevent marsh spots. “We go through the crop as early as possible to with 3l/ha of manganese,” he explains.

A two-spray fungicide programme including Bravo (chlorothalonil) and Amistar (azoxystrobin) is planned at early flowering. Manganese will be tank-mixed in both applications.

Pheremone traps will be used to monitor crops for pea moth. “We use Hallmark Zeon (lambda-cyhalothrin) when the threshold is met.”

Crops will be monitored for aphid levels and an application of Aphox (pirimicarb) may be required for control.

Finally, crops will be desiccated to aid harvesting using Reglone (diquat) with a 25-litre/ha water volume. “We like to use a high volume of water because it gives us better plant coverage.”

Commitment to the crop at harvest time is crucial to ensure a quality sample, Mr Gee says.

“We will break off from the wheat harvest to make sure we retain the colour of the peas.

“If you are not getting that quality, marrowfat peas can be reduced to selling as feed peas in a worst-case scenario.”