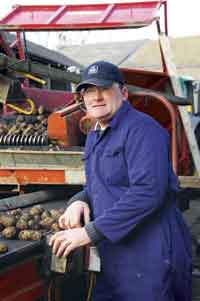 I am thinking of hiring out my special services to any drought-stricken farmers out there who are desperate for rain. I only have to think about making hay and hooking up to the mower when dark clouds seem to miraculously appear on the horizon.

As you may have guessed, we have been trying to make our first-crop hay and, after weeks with hardly any rain, we decided to mow – and then we had a week of showery weather, which made the job harder than we had hoped.

In the end, we managed to bale the crop and stack it when we got two consecutive fine days. Quality is excellent although yields are well down – mainly due to the dry weather, but also some pretty cold nights, which I am sure checked growth. Hopefully, we can get a good second crop to fill the barn, which looks decidedly empty.

Along with making hay, we are also between batches of chickens in the poultry unit, which means a mad few days cleaning and washing the sheds out ready for the next batch of chicks. The 60-70t of litter that we cleaned out will be stockpiled to be applied next year to the potato ground.

Potatoes are growing fast and the battle against blight has started. With current cool windy conditions pressure is low and I haven’t heard of any outbreaks yet – but, as ever, we need to be vigilant.

One concern is our Arcade potatoes, which were slow to emerge. We investigated further and found evidence of Rhizoctonia which is unusual as we have never really had it before. Hopefully, the crop will grow through it.