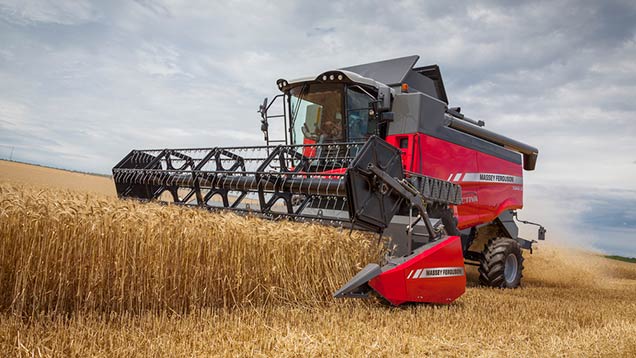 Torquey six-cylinder engines have long been the powerplant of choice for combine makers.

But with four-pot power getting ever more impressive, Massey Ferguson has decided to slot one into its latest entry-level Activa combine.

The five-walker 7340 will replace the Activa 7240 for the 2016 season and gets its grunt from a 4.9-litre Agco/Sisu block, rather than a six-cylinder Iveco.

This is the same engine fitted to the 6600 tractor series has been tuned to deliver 176hp. Massey reckons this will help carve a little off the annual fuel bill and cut cab noise, too.

As well as the engine change the new model has been given an adjustable concave with a front section that can be changed according to the crop type.

This can be fitted through the stone trap, meaning the driver can change to a wider maize version without having to remove the elevator. The concave also has narrower wires at the front and wider ones at the rear to increase separation area.

In the cab, the driver gets a slicker joystick that’s similar to the one fitted in the maker’s larger combines as well as electrically adjusted mirrors.

Both models are being built at the maker’s Breganze factory in northern Italy that was formerly owned by Laverda.