It’s taken four years to put all the pieces together but it’s definitely been worth the effort, says Richard Scholes of the bespoke potato harvesting system he has devised.

The operation to lift 400ha (990 acres) of potatoes is now handled by just one harvester. Moreover only one tractor – plus a couple of road trucks – is involved in hauling crop from the machine to store.

“We’re using fewer than half the number of people per shift involved previously, machine utilisation has doubled and field traffic is much more controlled and less damaging,” he points out. “And the job’s become a whole lot easier to organise and manage. Having coped with last year’s appalling conditions, I’m convinced we’ve done the right thing.”

Richard Scholes is an advocate of keeping things as simple as possible. The family farming business at Nafferton near Driffield in the East Riding of Yorkshire grows just four potato varieties – Estima, Marfona, Saxon and Harmony – and specialises in washed and prepacked bakers.

The business operates its own washing and packing lines and customers are UK wholesalers, the UK foodservice sector and direct to major retailers in Norway, Sweden and Denmark. In the latter country, especially, the “Scholes” brand is widely recognised for its quality.

“We pack 23,000-25,000t of potatoes annually – of which we grow the majority – mostly on Yorkshire Wolds soils that are fairly shallow and contain a lot of stone,” says Mr Scholes. “But we can produce a really good quality skin finish that has a lot of appeal.”

The complexities of running several harvesters to lift this crop were tackled in time for the 2008 campaign by switching to a single four-row machine, commissioning road-going bulkers with flotation running gear to operate in the field and operating 12-hour, day-and-night shifts to make the most of the investment.

“We started with a blank sheet of paper for the harvester but had some clear ideas of what we wanted to achieve,” says Mr Scholes. “The Dutch manufacturer Agrifac was very responsive and we liked the relative simplicity of the machines it built.”

The Raptor, as Agrifac now calls the harvester, has an 8t capacity bunker so it does not have to run with a trailer constantly alongside but also a picking table for additional cleaning. Instead of tracks, which can suffer when soil cascades on to them from cleaning systems, the machine runs on six individually driven and steered wheels – two tall row-crops at the front and four fat flotations at the rear – for maximum traction and manoeuvrability.

The harvester lifts four individual rows rather than the entire bed, which makes it important to set up and maintain prominent ridges. Large, hydraulically-driven discs either side of the three-piece shares guide soil on to the digger web and the depth control mechanism does without diablos to keep ridges loose and the intake area as open as possible. 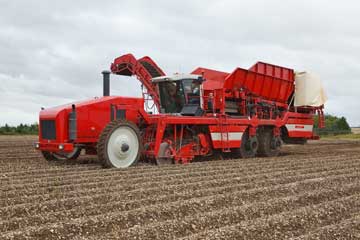 The Agrifac Raptor at the heart of the harvesting system lifts four rows at a time. Novel front engine and hydro transmission installation makes room for a bunker and picking table – and does not cause problems with forward visibility.

Two further webs sift out soil and convey the crop to a Scotts Evolution spiral roller cleaner before it is elevated to the picking section (which has space for six people but is operated with just two) and then into a bunker.

“Elevator height and bunker conveyor indexing are automatic to keep drops to a minimum,” says Richard Scholes. “The operator gets regular intake analysis damage reports by text from our own quality assurance team to help monitor the harvester settings and operation.”

In place of a fleet of 10 tractors and trailers scurrying around two or three harvesters, there is just one tractor hauling potatoes off the field in five road-going bulkers.

There are two standard units (which will be replaced in time) and three 28t-payload specials from Germany running on triple axles with Michelin XS flotation tyres and with hydraulic tailgates on the tapered aluminium bodies. The 360hp tractor hauls the trailers using a purpose-built fifth-wheel dolley on twin axles.

“The objective here was to reduce the number of tractors and drivers involved and concentrate this important operation into the hands of a skilled operator,” explains Mr Scholes. “It also gives us better control of soil traffic in the field and keeps tractor and trailer outfits of dubious legality off the road.”

Air suspension on the German-built dollies makes life easier when swapping bulkers and allows the front axle to be raised to increase weight transfer to the tractor if traction does become an issue.

“As for soil compaction and the flotation factor, we’re now moving 28t of potatoes using seven axles instead of four, so mobility and soil protection are actually improved using the road trailers,” Richard Scholes insists. “And on the road we’re running them securely and fully road-legally behind a pair of truck units, which travel at a faster pace than a tractor and trailer as well as with vastly greater fuel efficiency.”

The only change to the field-to-store system envisaged is to add a second hopper to the new Tong intake set-up so that the bulkers can be discharged in one go to slash the current 15 to 20 minute turnaround.

As it is, the new approach has dramatically simplified the often complex logistics of a multi-harvester system.

“Four years ago, we needed to assemble around 21 staff for a standard 13-hour shift; now, we need just eight for the 12-hour day and night shifts,” Mr Scholes points out. “Apart from being easier to organise, we can have skilled, experienced people on all the critical operations, which can only help us meet the quality standards we strive to achieve.”