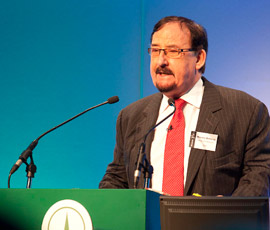 Maurice Moloney is to step down as head of Rothamsted Research after four years in charge at the world’s oldest agricultural research centre.

Prof Moloney, who was instrumental in bringing the GM wheat trials to the site in Harpenden, will leave Rothamsted in December.

He will then take a new post as group executive of Food, Health and Life Science Industries for the Commonwealth Scientific and Industrial Research Organisation (CSIRO), a national science agency in Australia.

“Leaving Rothamsted will be very hard for me. I truly love the place,” said Prof Moloney.

“The UK is now moving in a positive direction on agricultural biotechnology and food security research has received priority status. This has made this decision even harder.”

Prof Moloney took the reins at Rothamsted in late 2009, formally taking on his duties in April 2010. During this period he has restructured the organisation through a new scientific strategy published in 2011.

He responded to government calls for scientific researchers to partner more closely with the agri-technology industry through negotiating key partnerships with a number of small and medium enterprises in the sector as well a multi-million pound research partnership with Syngenta.

In addition, Prof Moloney has also expanded and diversified public funding sources for Rothamsted, which receives strategic funding from the Biotechnology and Biological Sciences Research Council (BBSRC), including several large awards from the European Union. This has doubled the strategic investment by BBSRC.

Prof Moloney added: “Overall, I believe that the institute is in a much stronger position than it was when I arrived and it has momentum, direction and a strong identity.”

Douglas Kell, chief executive of BBSRC, praised Prof Moloney for his leadership and raising the profile and impact of research at Rothamsted.

“Maurice recognised the value of Rothamsted’s research – not only for improving our knowledge but also for delivering economic and social benefits for the UK – and built on this for the benefit of the institute with exceptional results,” said Prof Kell.

“This has ensured an excellent future for Rothamsted Research and for UK agri-science. We wish Maurice the best in his new role and UK bioscience is indebted to him.”