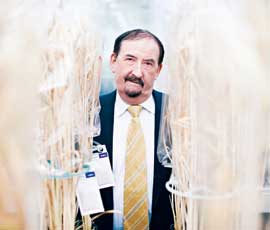 What’s your vision of research in the future at Rothamsted?

We have adopted a new strategy the PQRS strategy (Productivity, Quality, Reduction and Sustainability), based on four key research programmes. Our productivity programme is epitomised by our 20:20 wheat project. Quality is based around producing higher quality seed science – both in cereal seeds and oilseeds. Reduction is about reducing agriculture’s carbon footprint. And sustainability is a critical part of our research. By 2050, there will be nine billion people on the planet, so the pressure’s on to grow more food on the same amount of land.

When did you join Rothamsted?

What were you doing before?

I’m responsible for the scientific leadership, direction and creation of systems whereby the quality of scientific output can be monitored. Since arriving, I have revisited Rothamsted’s entire strategic plan. Fundamentally, we are focusing on delivering world-class science that anybody in the field anywhere in the world can look at and recognise as cutting edge.

Some critics argue that the UK is lagging behind other countries in terms of research into agriculture. Do you agree?

No. I don’t think we are at all. The UK is holding its own extremely well on agricultural research. The leadership at BBSRC has taken very seriously the plight of agriculture, food security and this whole question of understanding sustainability. If you look at the publications of cutting-edge science relevant to global food security, I’m convinced that the UK is in a very strong position. That’s not just Rothamsted, but also the John Innes Centre, the universities of Nottingham and Reading, and the James Hutton Institute in Scotland among others.

Why isn’t Rothamsted doing more to turn laboratory research into applied agricultural practice in the field?

For every piece of laboratory work we do, there’s always someone thinking in the lab, “how does this get out in the field?” Some of the work does and we also have a big international programme. For example, work done here by Ben Mifflin and Peter Lea on assimilation in nitrogen has changed the way people look at crop plants in Europe for nitrogen utilisation. Similarly, in the UK, we have seen dramatic increases in sugar beet yields over the last decade, partly thanks to the painstaking work that has been going on at Broom’s Barn, one of our other campuses.

There is much concern about the status of soils around the world. What plans do you have to enable Rothamsted to address the problems and to help restore and protect soil in the future?

We have got a strong soil science group, which can be broken down into soil physics and we have got one of the best soil physics scientists here, Richard Whalley. But I worry that some of our best soil scientists are nearing retirement. Nevertheless, a high priority of our strategic plan is to build a much stronger base of rhizosphere sciences – chemistry, physics, biology of what is surrounding the roots of a plant, which of course, is always soil. This involves mathematicians as well. They can model changes that take place in the soil and once they have got an appropriate model, can suggest parameters that would give us soil improvement or other parameters that if we’re not careful, will give us soil degradation.

Do you really believe that the average wheat yield in the UK will be 20t/ha in 20 years’ time?

20t/ha ought to be an average yield in 20 years. Under current conditions, with the germplasm that already exists, fields are capable of getting 10t/ha. Already, farmers who own significant plots of land are able to get up to 14t/ha, so the yield potential for 14t/ha is there. In New Zealand, trials have reached 15t/ha, so we’re not far off. It may take some step changes, including improvement of genetics, plant protection, increased photosynthesis, plant architecture, root structure and therefore the improvement of nutritional capabilities. It will also be things you don’t see; the root mass and how it reacts with the soil to extract nutrients in an efficient manner, increasing the growing season by six to eight weeks. If you put these things together, 20t/ha is not a ridiculous aspiration.

Farmers are being blamed for declining bee populations with the use of neonicotinoids. Is this fair?

It has been hypothesised that it might be low levels of neonicotinoids that can have an affect on foraging patterns. But there are so many other factors out there that our bee researchers are certainly not convinced that we know the answers to this yet. It’s going to require more work. If it turns out that it’s an agricultural chemical, we will absolutely have to have changes in the way we use these products. We can’t reduce the availability of pollinators as we still depend on them for all kinds of crop production as well as biodiversity. But we shouldn’t change an effective system of insect control if that’s not really the reason.

Given that there is widespread consumer rejection of GM crops in Europe, why has Rothamsted decided to go ahead with a GM wheat trials of a crop that will probably find no market?

People who are antagonistic to this technology completely misunderstand our aims. Firstly, the GM wheat trial is it’s not a commercial trial, it’s simply an ecological experiment. Right now, to control insect attacks in wheat, we use an enormous amount of insecticides. Our chemical ecology group is asking if there’s another way we could grow wheat and limit insecticide use. The trial works spectacularly well in the lab, the growth chamber and in the greenhouse. We need to know if it works in the field. If it does, we’re not going to be promoting the commercial use of this. We would simply say: here’s an alternative.

Where do you believe the technologies for pushing production might come in the future given the GM is not palatable in the EU and that agrochemical actives are under increased pressure of de-listing?

There’s a lot of technology we could look at even if Europe didn’t look at GM for life. GM only accounts for about 1% of what we spend money on right now. It’s not an awful lot. It’s all experimental, not commercial. I think the big revolution is in systems biology; about the use of genomics, understanding the use of metabolites and proteins used in a plant, as well as “transcriptomics” – the expression of genes and how these genes function. For example, marker assisted selection is making plant breeding an awful lot easier by being able to pinpoint specific genes that we need.

Do you see any negative aspects of GM technology from a food safety or environmental protection point of view?

It’s a very important question, but what it doesn’t take into account is the amount of thought that goes into any of these experiments before they actually get started. For example, our GM wheat field trial passes all the safety and reliability tests. That’s why DEFRA gave us permission to do it. There’s a very small risk that pollen could escape – something like 0.00001%, according to the papers we have looked at. The consequences of a mint gene escaping into the broader environment are so low. If you multiply the likelihood by the consequences, you have to ask why would we worry about it? The risk is so low to anybody or any wildlife. The only reason there’s a fence around the trial, is not to keep pollen going out, but to stop people from getting in. There’s only one risk from this trial. If people break down the fence and maraud, they might take seeds or some other plant material outside. That would be a bad consequence because right now, it’s completely contained and it’s completely safe.

Moloney in a minute

What do you drive? A Porsche with the letters “GMO” in the number plate

What is your favourite pop group? U2

What’s your favourite film? A Man for All Seasons

What do you do in your spare time? I play guitar, cycling, skiing and visiting the beautiful British countryside

What’s your idea of food heaven/hell? El Buigi restaurant in Barcelona is heavenly. Any burger restaurant is my idea of hell.

What would surprise people about you? I’m a good cook.