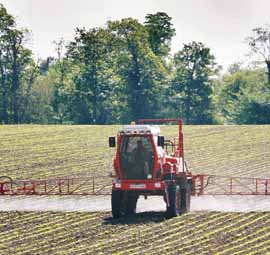 With the price of metamitron set to rise by up to 50% due to problems in sourcing the ingredients used in its manufacture, much will depend on specific weed problems as to how essential the chemical is for individual growers, says Miss Chambers.

“Metamitron’s price has actually dropped in recent years and it’s become a core component of most programmes. Some growers will just have to accept the extra cost – others may be able to reduce its use or even manage without it.”

Its main role is as a residual component, especially for late-germinating species such as fat hen, she explains. “As a pre-emergence residual it’s not so essential – most growers use chloridazon in that slot.”

Metamitron’s other use is as a “safe” residual in the particularly important first spray on light soils. Major weeds for which metamitron is usually first choice are knotgrass, annual meadowgrass, groundsel, field pansy, common orache, late-emerging fat hen and mayweed, says Miss Chambers.

“It controls many other species, but these are the ones growers should focus on if there is a shortage or price hike.”

Growers reserving their perhaps limited metamitron for late-emerging fat hen will need doses of at least 1 litre/ha or 1kg/ha, advises Miss Chambers. “Otherwise they’ll need to add an extra contact spray at the end of the programme, especially on gappy crops.”

Bayer’s new Betanal maxxPro has good contact activity and trials show it could substitute for some metamitron, she notes.

“It has a very good crop safety record, and is especially needed on light soils where weeds like knotgrass emerge early in flushes with the crop. We may replace it with another residual, such as lenacil, in our mixes – but only in certain circumstances or if metamitron becomes unavailable.”

Lenacil is more useful for black bindweed and brassica weeds such as volunteer oilseed rape and charlock, says Dr Turnbull. “I find it’s often a good partner when Debut is in the mix. However we’d need to be careful. Low rates are needed on light soils, and it can be a bit hot on the crop in some mixes.

“There are signs that the improved contact activity of the newer well-formulated products, such as Betanal maxxPro, will allow us to use a lower rate of the residual metamitron partner and still achieve good weed control on target weeds.

“We’ve always understood that a good accumulated dose of metamitron is required to control late-germinating fat hen. Without it we’ll need to be vigilant for freshly-emerged fat hen just before the beet meet across the rows. If they’re small, and provided they’re not shaded by the crop, they’re easily controlled by relatively inexpensive contact-only sprays.

Ruth East, an independent agronomist from Lincolnshire, will not be deterred from her programmes by any metamitron price hike. “I always start with a pre-emergence treatment of half-rate chloridazon plus half-rate metamitron, with a low dose of ethofumesate added if there’s a known history of blackgrass.

The pre-emergence mix takes care of knotgrass, which is hard to control beyond the first true leaf stage, notes Miss East. “On my chalk soils, fool’s parsley is a problem and this mix also takes care of that.

“I then like to go for an early approach to remove weeds before the crop gets to the four-leaf stage. I tend to use a mix of contact herbicide plus a top-up of residual, which usually contains low doses of metamitron or chloridazon, depending on weed spectrum, and I always include oil.”

She shuns the strategy of spraying later when weeds are larger. “I feel there is greater risk of crop damage, and the weeds are more difficult to control. All my post-emergence applications are based around a beefed-up FAR system, and I usually get away with two post-emergence sprays.”

“More and more growers are finding the FAR approach difficult to fit around spray requirements in other crops,” says Miss Chambers.

Management-easing strategies, more expensive in herbicide, but cheaper on application costs, include Broadacre from DuPont. This is a two-spray programme of a five-way mix containing triflusulfuron. It includes a low rate of metamitron, she notes.

Bayer’s Flexible Strategy is a two to three-spray programme based on Betanal maxxPro plus residual.