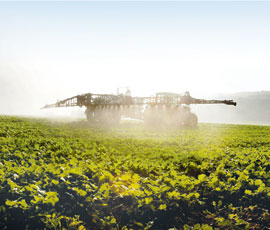 Oilseed rape growers should take advantage of the current good autumn growing conditions to encourage pre-winter root and leaf growth with micronutrient use, according to crop specialists.

“For the last few years, autumn has proved to be a very important growing period for oilseed rape,” says Ian Jackson, nutrient expert with ProCam. “Autumn sunlight interception has increased, while spring sunshine and temperatures have fallen.

“A lack of moisture in the last couple of springs has also been a factor. We’ve seen very little growth before April,” he notes.

The way to offset this is to promote root and leaf development in the autumn, while it remains mild, he suggests. “The aim is to build a larger canopy and more robust crown to withstand pigeon damage over the winter. It also prepares crops for early spring growth, giving them a three-week advantage.”

Mr Jackson favours foliar applied autumn nutrients, so that dry soils can’t interfere with their uptake. “Straight nitrogen tends to sit on dry soils in the autumn and can result in rapid top growth, which is then at risk when the first frosts come,” he says.

A better approach, he believes, is to use a phosphite-based product which stimulates root growth. “The earlier it goes on, the better. Once they start to grow rapidly, which is the case for many crops this year, then they may well have an increased requirement for boron and magnesium.”

Both of these micronutrients can be added in with planned insecticide or fungicide sprays, he says. “An added bonus is that they help with frost hardiness. Both will need a further application in the spring, once crops do start to move again.”

“What matters now is that micronutrient levels don’t suffer from a dilution effect, leaving crops with a shortfall. The next couple of weeks are an ideal opportunity to apply a brassica micronutrient mix, to maintain a healthy crop going into the winter.”

While the optimum time for most micronutrients is in the spring, some need remedying sooner, he continues. “Manganese is a good example and shortages will be obvious on deficient soils. Growers can address it easily.”

Other micronutrient issues are more difficult to spot at this time of year, admits Mr Low. “Getting crops off to a good start before the winter arrives and closing off the rows to prevent pigeon damage are important.”

Most brassica micronutrient mixes are suspension concentrates and can be easily tank mixed with agrochemicals, he adds. “It isn’t an expensive operation at £9-15/ha and it will keep crops on track, preventing any yield loss in the event of another dry spring.”

Mr Low also advises the inclusion of sulphur in the autumn. “Soil samples have been coming back with low sulphur levels, so there’s a chance to put this balance right.”

Independent agronomist Paul Sweeny agrees that many oilseed rape crops will benefit from additional boron and manganese, but is concerned that some of the commercial mixes don’t supply enough to meet crop requirements.

“Putting boron powder in a tank mix will supply two to three times the amount that some products contain.”

Heavy soils won’t need an application until the spring, he cautions. “But the light, sandy soils should have an application of boron by the end of this month.”