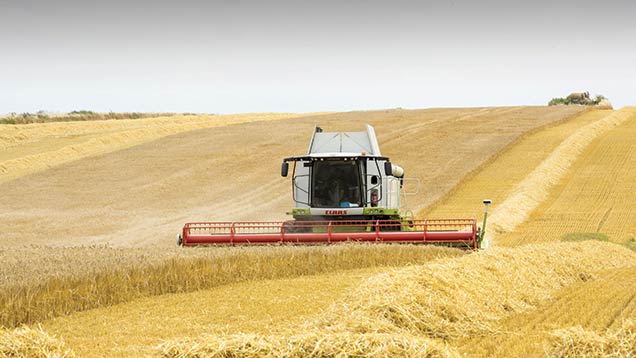 Milling wheat premiums reached almost £50/t earlier this year, but with the milling wheat area up by about 13% this season, what does harvest 2015 have in store?

It would seem logical that greater plantings will lead to lower premiums, but it will all depend on the quality of both the UK and global crops, says Jack Watts, market analyst at HGCA.

“Last year France had quality problems with their milling wheat, and the UK had a low-protein crop, so there was a lot of feed wheat around that dragged the feed wheat base down,” he says.

“That opened up the milling premium – in early February it reached £48/t and although it has since dropped to £32/t, the season average has been £37/t so far.”

That level is way above the previous five-year average of £17/t – in fact, a £30/t average has not been breached since at least the early 1990s, adds Mr Watts.

A contributory factor to the higher premium – or lower feed base – has been that, despite the large 2014-15 crop, the UK has actually imported a lot of wheat this year, both in the form of high-quality milling wheat and cheaper feed sources.

“Between July and February the UK imported 1.14m tonnes of wheat – last year [when the UK was a net importer] that was 1.55m tonnes,” says Mr Watts.

“And in 2011, which was a more ‘normal’ year with an exportable surplus, imports totalled just 598,000t between July and February.”

Exports over the same period reached 1.34m tonnes, compared with 328,000t last year, when there was a much smaller crop, and 2.08m tonnes in 2011. It is, therefore, likely that there will a considerable carryover of old crop into the new marketing year.

But with less wheat in the ground, will that matter? According to the HGCA’s planting survey, farmers drilled 7% less winter wheat than in 2013-14, and are likely to drill more spring crops as a result.

Anecdotal evidence from seed sales suggests milling wheat will account for 13% more of the crop than last year, and with spring wheat typically being milling varieties, there is the potential for a large milling wheat acreage.

The split between different wheat grades must also be considered, says Mr Watts. “Over the past 10 years we’ve seen a lot of high-yielding Group 4 varieties grown; now there are new milling wheat varieties that are narrowing the yield gap, so we are starting to see a shift towards these Group 1 and 2 varieties.”

Such varieties include Group 1s Skyfall and Trinity and Group 2 Lili, which have yields of 102%, 102% and 105% on the HGCA Recommended List this year. That compares with Gallant and Cordiale at 97% and feed variety Santiago at 105%.

“Farmers will look to grow these new milling varieties for their yield potential, with any milling quality as an added bonus,” says Mr Watts. “That is a potential threat to the milling premium, although I think it will be a gradual transition rather than a one-season step-change.”

Of course, regardless of the variety choice, weather is the final decider over milling wheat quality – and therefore premiums – in any given year. “Given a return to more normal conditions, we would expect more top-quality milling wheat than last year,” says Mr Watts.

“However, with newer higher-yielding varieties it may be difficult for farmers to reach full protein specifications, so there may be an opportunity for some to secure additional premiums for high-protein samples.”

Those who do achieve high-quality specifications should be careful to not just sell their wheat on a normal 13% protein contract. “You either need to secure an additional premium or blend the wheat in store with lower-protein samples to reach the 13% level,” he adds.

Fortunately, much of the nitrogen required to boost protein levels does not have to be applied until fairly late in the growing season, so farmers growing these new high-yielding varieties have tremendous flexibility.

“If the premium isn’t there you can just grow for yield, but if the price is right you can tailor your agronomy accordingly and target the milling market,” says Mr Watts.

One question that Camgrain managing director Philip Darke has is whether the newer varieties – including Group 2 spring wheat Willow, which has a yield score of 108% – will actually perform in the field and the baker’s oven.

“Skyfall has come from nowhere to 7% of C2 seed sales – although with farm-saved seed, that won’t be fully reflected on farm,” he says. “Warburtons like it, but millers need to be confident that it, and other varieties, will do the job,” he says.

Crusoe will probably remain the variety of choice for those farmers looking to maximise protein quality. “I think if I was making cropping decisions for 2016 I would go for a mix of Crusoe and then Trinity or Willow, where the output potential looks very good. I think the market share of Gallant, Solstice and Cordiale could just fall off the cliff.”

Despite the higher milling wheat plantings, Mr Darke cautions about being too negative towards the milling premium next season.

“UK milling wheat is trading at more than £10/t discount to the equivalent German imported wheat, on a delivered basis, so there is currently no need for premiums to drop any further. At the moment you would struggle to make £30/t premium for 2015 Group 1 milling wheat, and there is a long way to go before quality is assured.”

Although there were plenty of buyback contracts available early in the season, there is no real trade now, as millers and farmers are waiting to see what quality the harvest produces, he adds.

“Farmers have probably sold less new-crop wheat at this time than in previous seasons, and if we have another big harvest in the northern hemisphere it will put feed wheat prices under further pressure. It is possible we may see a weather or political event, and demand is at a record level, so we shouldn’t be too pessimistic at this stage.”

Farmers should also identify the best market in their area to make the most of local premiums, says Mr Darke.

“There is strong domestic demand for feed wheat for bioethanol, which is creating a geographical premium in the North East. And this season the best export opportunities have come from proximity to the deep water ports – Southampton, Tilbury and Portbury – although every season is different.”

“If all you grow is feed wheat then that is all you can sell. Export sales are very opportunistic and every year is different, but the better the quality of wheat you have, the more origins you can sell to.”

In 2014-15, the UK managed to replace French milling wheat sales into north Africa, and because of the weak pound against the dollar, British wheat was very competitive on the world market, says Mr Doyle.

In contrast, the strong pound against the euro made it extremely challenging for intra-EU sales. “We can build on those third-country sales if the opportunity is there, but you have to work hard to find buyers – they’re not going to exclude other origins that might have cheaper or better-quality grain.”

Traditionally, the UK sold a lot of soft biscuit wheat into Spain and north Africa, but that market has declined in recent years.

“However, soft wheat still has a role to play. People say the premium isn’t good enough, but it is not just about the premium – it is about the overall price,” says Mr Doyle. “And if all we have is feed wheat then we won’t be filling those homes.”

The growth of maize imports to the EU is a particular threat to the feed base, he warns. “EU maize imports are huge; as a result EU wheat exports are now pushing 30m tonnes.” However, the increasing area of milling wheat in the UK is not being mirrored in Germany and France, which should be beneficial to premiums.

“In the long term it is the new EU countries that pose a threat. Their yields are way behind the UK, which means the potential for them to increase is significant,” he adds. “That could undermine the feed base, so, again, it benefits us to target the premium market.”