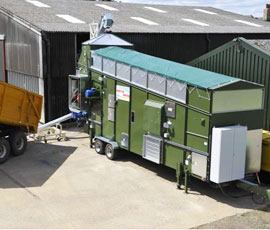 A new double-flow continuous drier, able to travel on-road at up to 30kph, is the latest development from post-harvest specialists Alvan Blanch, on show at Cereals on stand J1108.

Built to satisfy increasing demand from contractors and those farming between several locations, the new mobile driers can handle up to 25t an hour, yet can be ready to transport to another site within hours.

“We have produced mobile versions of our double-flow continuous driers for many years,” said Andrew Blanch. “But these have usually been held back by the physical size of the machines.

“While theoretically within the legal limit for on-road travel, the small roads and lanes along which these machines are often expected to travel demands a slightly different approach and some good engineering thinking.”

In this case, it was Hampshire agricultural engineering specialists APECS who suggested the modifications necessary to transform the basic drier into something truly mobile.

APECS’ Jeffrey Allison said: “The new concept developed during consultation with one of our clients, Scribeland Contracting. As a sizeable contracting firm, they’ve got farmers with fields to cut and grain to store – but no drier. And during the wet harvest of 2008, that proved a real challenge – so the thinking started.”

Most prominent among the changes made to the basic model are a fold-down roof and a detachable hopper, which between them knock almost 1.5m off the machine’s height. “Easily manoeuvred with a telehandler, the absence of the hopper lends the machine the same dimensions as a combine,” Mr Allison said.

“Once off the drier, the hopper, generator and dependent baffled fuel tank can be loaded onto a trailer.”

The mobile drier sports all the features of the standard Alvan Blanch continuous-flow drier, including improved fuel consumption of up to 15% thanks to the system of low temperatures and high airflow. This reliance on airflow can often extract up to 2% moisture without any heat at all.

Of particular interest to contractors is the mobile drier’s ability to handle a wide range of crops in addition to those considered more ‘traditional’, such as sunflower seeds. And the machine has successfully handled evening primrose and even borage.