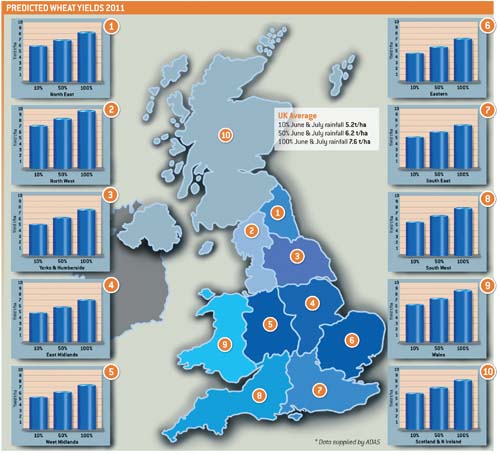 Average wheat yields could plummet by as much as 2.8t/ha if significant rainfall doesn’t arrive in the next two months, said ADAS’ Roger Sylvester-Bradley.

Figures fed into an adapted Australian yield model suggested average returns could be as low as 5.2t/ha if the drought continued and June and July rainfall was 10% of the long-term average.

But this could rise to 6.2t/ha if rainfall reached 50% of the average in June and July, and 7.6t/ha if precipitation returned to normal levels, he told Farmers Weekly at the recent ADAS Boxworth open day.

“If we get average rainfall from now on it’s not a disaster, but if we don’t, yields could be significantly reduced.”

Regional variations were considerable, with the model predicting peak losses in the East Midlands, ranging from a 3.1 to 0.9t/ha drop. But drought effects in Scotland, Northern Ireland, Wales, the north east and north west were unlikely, as in normal years other factors tended to determine yield in these areas, he said.

Figures for water availability from both soil and rainfall were fed into an adapted French and Schultz model, which presumes yields will be limited by drought. The output should give a much more accurate prediction of yield loss than visual assessments, said Prof Sylvester-Bradley.

“So far, most 2011 predictions have been based on guesswork, but this is a more scientific approach to predict what is going on. I think we should be within 0.5t/ha accuracy.”

If anything, the estimates were conservative because nitrogen uptake, which has been delayed this season, was not taken into consideration, he said.

Average soil moisture deficits were around 120mm last week in most wheat growing areas, which was exceptionally large for early June, and conditions were now comparable to the severe 1976 drought.

In 1976, yields plummeted below 4t/ha, but average rainfall in the period was significantly higher than this year, he said. “In Cambridgeshire, 1976 rainfall was 68mm between March and May and yields were about 3.9t/ha – 1.2t/ha down on the long-term trend.”

But rainfall figures for the same period in 2011 were just 25mm, meaning there was a chance average yields could drop by similar amounts to 1976, he said.

On a more positive note, the yield knock meant it was likely to be a high-protein year for milling wheat, he added.