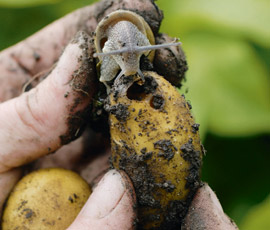 A multi-pronged attack is being urged on slugs in potatoes, as Andrew Blake discovers

Integrated control programmes are important for potato growers needing to manage slugs, especially those growing varieties particularly susceptible to the pests, according to Scottish Agronomy.

“The dry spring does not mean slugs will be any less of a problem in potatoes this season, so a robust programme will be essential, especially on sensitive varieties and those growing in at-risk fields,” says senior agronomist Eric Anderson.

In Scottish Agronomy’s trials last year methiocarb was consistently the highest performing active ingredient when compared against metaldehyde and ferric phosphate. In seven years of the firm’s trials, methiocarb has proved the most reliable molluscicide, notes Mr Anderson.

“Over the past seven years, we’ve found that methiocarb has consistently been the most robust treatment – in that it gives the best control of slugs under high pressure and the greatest reduction in tuber hollowing.”

“We need to take care when managing slugs in potatoes and consider soil type, irrigation, variety and previous crop. “Under those high pressure conditions, however, no single product can get you safely through the whole season.

“Potatoes in store can be worth a lot of money, and with growers spending up to £6,000/ha producing them they need to protect their investments.”

Tuber hollowing by slugs can make crops unmarketable. “For most outlets the allowance for total defects, including bruising and slug hollowing is only 5%.

Timing is everything, he stresses. “Two well-timed applications of methiocarb provide the ‘backbone’. The first is at 75% canopy cover; the second, four to six weeks later depending on season. If needed, additional treatments can be applied between these core treatments or up to canopy burn down.

“August is often a pivotal month for follow-up application during the time when tubers are big enough for slugs to chew on and when they’re active on the soil surface.”

Given the maximum permitted methiocarb dose per crop of 15kg/ha (of a 3% methiocarb product such as Rivet), Mr Anderson’s standard recommendation is to apply 5kg at each timing, leaving 5kg in reserve.

That reserve may be used in two ways, he suggests. Depending on the likely slug pressure, driven largely by the weather, it can be applied mid-way between the two key timings or split into two 2.5kg/ha doses.

“In high slug pressure situations we have seen a benefit from using an additional intermediate treatment and another as a final treatment. These could be either ferric phosphate or metaldehyde; using one of each obviously eases the pressure on metaldehyde,” he suggests.

Slug pellets need to be durable and remain attractive to slugs through the warm, moist conditions typical in mid to late summer, and good durability is especially important in irrigated crops.

“Ferric phosphate is a useful adjunct in overall programmes, but it needs to be applied at close intervals because the pellet integrity isn’t as good as it is with methiocarb. It breaks down more quickly in heavy rain.”

Up to 700g/ha of metaldehyde may be applied in a calendar year, but the total dose from 1 August to 31 December is only 210g/ha, he notes.

One feature of ferric phosphate over metaldehyde and methiocarb is that it may be spread on headlands close to water. “A mandatory 6m no-spread zone is stated on metaldehyde product labels. Growers are encouraged not to apply methiocarb on headlands.”

Bayer’s Richard Meredith agrees that no single approach to slug control in potatoes can be completely reliable. “But a well-timed methiocarb two-hit backbone to your pellet programme gives the best chance of success,” he says.

The maximum individual dose of methiocarb is 150g/ha with no more than 450g/ha in total permitted per potato crop, he notes.

“The timing, before canopy closure, is often pivotal, but it does require conditions to favour surface activity by the slugs.

“Follow- up applications should be made as their activity and weather dictate, but shouldn’t normally be within three weeks of this key application.

“However, as harvest approaches the maturing tubers offer slugs a good reason not to come to the surface, so next methiocarb shouldn’t be left too late. The second methiocarb treatment has often made a successful contribution in trials when applied in August.

“Precisely when during that month it should go on is determined by site-specific conditions such as weather, slug numbers and the species present which influences the timing of new hatchings.”

Some species hatch at different times which may put them outside the control window of earlier applications, he notes.