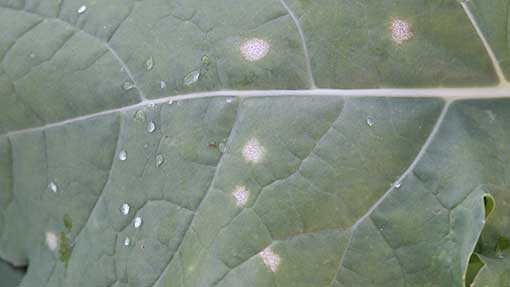 Recent wet weather has provided ideal conditions for phoma in oilseed rape crops and growers should monitor the disease and apply a fungicide as soon as thresholds are reached.

The moisture was much needed for crops that received little rain during the driest September on record, but it’s encouraged phoma spore release from infected stubble or trash from last year’s crop.

Adas plant pathologist Faye Ritchie says that once spores have been released, symptoms typically appear on leaves 10-15 days after infection.

She is now beginning to see the typical white or fawn coloured circular lesions dotted with small black fruiting bodies in the earliest sown crops and if left untreated, can cause yield losses of 0.5-0.7t/ha.

However, the forward nature of some of early-drilled fields means the plants are better able to deal with infection, so she urges growers to prioritise smaller crops and susceptible varieties for treatment.

“The threshold for a fungicide spray is when 10-20% of plants are infected, but with those smaller crops I would err towards treatment at 10%,” says Dr Ritchie.

Typically, phoma is treated with two half doses of the appropriate fungicide, the first being applied as threshold is reached and the second 4-6 weeks later if reinfection occurs.

Dr Ritchie says product choice will depend on the crop, with prothioconazole being an option in a curative situation.

“However, in a more protectant situation tebuconazole or metconazole might be preferable, particularly in a larger crop where plant growth regulation is a more immediate priority.”

The Rothamsted Research phoma forecast is currently very patchy, with some sites used for monitoring reaching threshold already, but others within the same county are not predicted to reach threshold until late October.

Bayer CropScience’s Tim Nicholson says the few showers that occurred during September have caused localised infection, making it extremely risky to base spraying decisions on the forecast itself.

“There is no option this year but to walk all your crops to monitor disease progress locally, as you could get caught out,” he says.

Mr Nicholson says he has heard of a number of crops treated with a tebuconazole or metconazole, but these have largely been triggered by plant growth regulation rather than phoma control.

Many growers have also had their herbicide treatments delayed, waiting to see if they have a viable crop after the heightened threat of flea beetle damage.

“It’s about finding a balance between disease control and herbicide appliactions. Growers that have used Centurion Max will have to bear in mind the 14-day interval before you can apply another pesticide,” explains Mr Nicholson.

With many crops expected to reach threshold later in October or early November, a phoma spray is likely fall outside the 14-day interval, but will coincide with the traditional light leaf spot fungicide timing.

Mr Nicholson believes this gives growers the opportunity to kill two birds with one stone and apply a higher rate of prothioconazole to hit both diseases hard.

It is typically applied at 0.32l/ha, but he is recommending that 0.46l/ha is more appropriate this season, particularly as azole chemistry has lost some curative activity against light leaf spot due to fungicide resistance.

“With the higher rate, you will also get some more persistence from the product which will help if you can’t get back on the field with the sprayer four to six weeks later with a follow up treatment,” says Mr Nicholson.