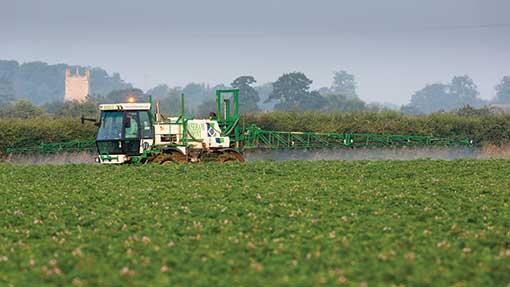 Populations of the pathogen – Phytophthora infestans – are constantly changing and monitoring work has shown two genotypes are now dominant.

The “pink” 6_A1 and “blue” 13_A2 strains have risen to prominence over several years, with both able to infect crops at lower temperatures, with shorter latent periods and forming larger lesions than previously dominant genotypes.

David Cooke, blight expert at the James Hutton Institute in Dundee, explained these characteristics have been key in the two establishing dominance.

“There are other factors, but primarily it’s because of their ability to infect and spread under cooler conditions earlier in the season with a higher efficiency than older strains,” he says.

“It’s like the ‘founder effect’ – if you get there first, it’s likely you’ll dominate,” adds Dr Cooke.

Agronomists have also been seeing evidence of the more aggressive nature of late blight in the field in recent seasons, with it becoming more difficult to control.

Scottish Agronomy’s senior agronomist Eric Anderson says once the disease gets into the crop, it could explode extremely quickly.

All diseases have a latent period – the time it takes for symptoms to express themselves in crop foliage – and with previous blight strains, that was about seven days.

“It’s nearer to three to four days with the two strains now dominating, so there is much less time for us to disrupt the pathogen’s life cycle for control,” explains Mr Anderson.

Mr Anderson says with few curative options in the blight fungicide armoury, relying on products to take out blight established in the crop is not an option.

“Keeping blight out of the crop in the first place using good cultural practice and the right products at the right time, with the best application practice, is vital,” he adds.

There are currently few commercially accepted resistant varieties and until there are, he believes all crops need multiple sprays to control blight – typically 10-15 treatments.

“You are investing more than £6,000/ha to grow a crop, so protecting against the disease is vital to see a return on that investment,” Dr Keer told a recent blight control round table briefing.

There are many blight products available, with various modes of action, and Bayer CropScience’s Albert Pineda says it is important to understand how they work so choice can be adjusted to suit the conditions as they develop.

“Knowing what to expect from each product will allow you to use them in the correct place in the programme to get the best control,” says Dr Pineda.

Blight can be controlled by several different modes of action, but the key to protecting new growth – which can double canopy size in 8-10 days – is systemicity. That means the active ingredient moves through the foliage as it grows.

Anti-sporulant activity will also help reduce the amount and viability of blight spores released into the crop to reinfect surrounding plants and unprotected new growth.

Both Mr Anderson and Dr Keer agree the key products available to build a blight fungicide programme are Infinito, Ranman Top and Revus, with Infinito the standout of the three.

Ranman Top and Revus are largely contact fungicides that work in the wax layer of the leaf and can be redistributed to new growth as the plant grows, giving some protectant activity.

The propamocarb active ingredient in Infinito offers systemic activity, while the fluopicolide element is an anti-sporulant, providing an ideal combination of modes of action.

“I have been carrying out product trials for more than a decade. Infinto has been in the top three every year it’s been available, but it’s really stood out in the high-pressure years of 2007 and 2012,” says Dr Keer.

Potato foliage is most susceptible to blight infection when the plants are very young and again when older than 70 days, with intermediate growth more resistant.

Infinito can be applied at full dose (1.6 litre/ha) up to four times in a season and Dr Keer prefers to use the product at an early stage to ensure the disease is kept out and the crop protected as it grows quickly.

“The product is flexible and could fit anywhere, but I think the early season is where things can go wrong in the east of England, so that’s where I target the best product in a high-pressure year.

“Where pressure is low, a more cost-effective alternative might be sufficient though,” explains Dr Keer.

In Scotland, Mr Anderson prefers to begin his programme with cost-effective alternatives at rosette stage and use Infinito in sequence from mid-season, just before tuber initiation.

His main driver is Infinito’s activity on tuber blight, which occurs when inoculum are washed from foliar or stem lesions into the ridge to infect the tubers, and just 0.5% infection can cause rot and storage problems.

“There are only a few products that have efficacy ratings for tuber blight and Infinito is one, so using it to reduce inoculum at this stage is important in my strategy,” says Mr Anderson.

As important as product choice is dose, timing and application to ensure the fungicides applied are given the best chance to work.

“Using the appropriate angled nozzles, controlling boom height and steadier forward speed will help penetrate into the middle and lower leaves, which are a big source of blight inoculum,” says Mr Anderson.