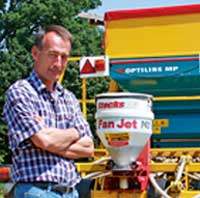 Until two years ago, Bill Turtle was content to establish his crops conventionally using a plough-based system. It was a format that had been used successfully for years.

But then came the hike in fuel prices and, like many other growers, he was horrified to see how these increases had affected his crop establishment costs.

“From being an insignificant cost only a few years before it was now a major factor. It was time to think of ways to trim this down.”

Based at Sible Hedingham, Essex, Mr Turtle runs an arable area of 465ha (1150 acres), of which 222ha (550 acres) is in hand and the remainder either rented or in stubble-to-stubble contracts.

The soil, which is predominantly heavy, supports autumn-sown crops of wheat, barley, oats, oilseed rape and there is also 22ha (55 acres) of sugar beet.

Mr Turtle’s initial attempts to reduce establishment costs in the autumn of 2007 centred on an Amazone drill/powerharrow combination with subsoiler legs, which was used directly onto stubbles.

“It did a good job but it was too slow and needed a shedful of power to operate – more than our 150hp John Deere 6920 was happy to produce,” he says.

“On the plus side, fuel costs were down by nearly a half but, to make sense of this system, I would have had to purchase a more powerful tractor.”

Now convinced that direct drilling could be the solution to reducing costs, he began looking for a suitable drill.

After some discussion he purchased a 3m Claydon SR which he planned to use for the 2008 drilling season.

A nine-row tine drill, the SR drill uses a spring-loaded front tine to break out the soil and a second coulter tine which works directly in line, from which seed is delivered.

When drilling cereals or oilseed rape a coulter tine with a wing is used so the seed is sown in a 10cm band. Other seed types, like maize and beans, are sown in a single groove using a wingless tine.

“It’s a heavy drill and I’ve had to water ballast the front wheels of the 6920 and pile on a few front weights to keep everything on the ground when the 1.25t seed hopper is filled,” he says. “But there’s plenty of weight transfer to the rear wheels.”

With the wet weather causing harvest to run on into September last year, there was precious little time to learn how to use the drill.

“Despite the conditions, we made the point of baling all the straw to help reduce any potential problems of surface trash,” he says. “I was determined to play it safe for the first year.”

Oilseed rape drilling began on the 24 August on 60cm rows but Mr Turtle thinks it may have been better at 30cm – the gap between the rows was too wide and encouraged pigeons to land and cause damage.

The wheat, barley and oats were planted as soon as the fields came clear, with the drill moving across the stubbles at about 50 acres a day.

A dose of slug pellets was applied at the time of drilling.

“It took some getting used to,” he says. “Yet we persevered and eventually the job was done. And then the worry started”

Where it had germinated and got away, the oilseed rape was good but there were areas that struggled to make a start and suffered from pigeon damage, slugs and the wet winter weather. The farm didn’t look very pretty during the winter months.

“I admit I was very concerned about some of the crops which just didn’t want to get on with life and start growing,” he says.

“I think one of the key lessons we’ve learnt is that we need to be on with the drill about two weeks earlier than we normally plan to.”

All has changed though and by the beginning of July, most crops have filled out and look very promising.

“You can still see the drill rows but I’m told that is normal and the extra space does seem to have allowed larger seed heads to form,” he says. “It’s also possible to see where the combine harvester was running which makes me think we need to pay more attention to compaction.”

Mr Turtle concedes he has a lot to learn about what does and doesn’t work when direct drilling.

“The bottom line, though, is that our establishment costs, when compared with conventional plough-based systems, are down by more than £30,000 – and that’s a pretty good start.”