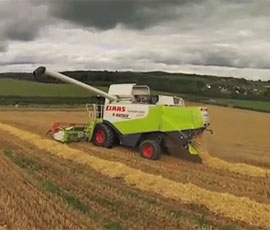 Although the Palmedor out-yielded Eraton by 0.4-0.5t/ha, the overall average was 3.9t/ha, which was pleasing for High Erucic varieties, said Mr Payne.

However, the ChaCha spring barley was less exciting, producing a mediocre 6t/ha. “Half of the fields are second spring barleys, thanks to the wet autumn – but we haven’t spent too much on growing it, which is a bonus.”

Mr Payne was cutting the last field of spring barley today, and would move into winter wheat next.

“We’re spraying off the second wheats at the moment, to clean them up before drilling oilseed rape,” he said.

“It won’t be a bumper year, but it shouldn’t be a bad one. If we have 12-14 days’ good cutting then we can put the combine away for another year.”

In a bid to improve soil structure and drainage after last year’s wet autumn, Mr Payne was also putting in 120ha of mole drainage, and cultivating behind it.

“The soil is cultivating quite well – I think it’s a case of making our own luck this year.”