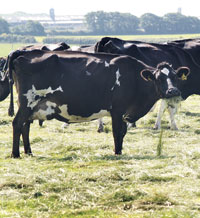 Mowing pasture pre-grazing can extend the rotation in a dry spell and encourage cows to clean up fields, according to a Pembrokeshire producer.

Bill Ridge, of Narbeth, mows grazing blocks at covers of about 2700kg/ha DM, as paddocks start seeding. Not only do cows eat all the mowings, maximising intakes and use, but re-growth is good, too.

Mr Ridge, who runs a herd of 500 cows, reckons mowing is much more effective than topping after cows have grazed paddocks. “Topping is wasteful,” he says. “By mowing before grazing cows go in and eat the lot, but if you top afterwards it leaves a thick mat and the grass gets dirty. Cows won’t eat it.”

It also gives a re-growth advantage of two to three days, he says. “By mowing you go into the field the day before the cows graze it, but with topping it is the day after so you are losing two to three days.”

Mr Ridge used mowing as a tool to manage grass when he ran an organic system. Since reverting to conventional production he has continued to mow pastures to extend the grazing rotation. He mows some of the fields that have not been cut as silage in late May, but most mowing is done in July.

Although some farmers report a drop in yields he says he notices little difference in production levels when cows have eaten mown grass. In fact, because the grass grows back well after mowing, yields can sometimes increase later in the season.

“Some will argue that cows are eating poorer quality stuff, but they really seem to enjoy it and we don’t lose any production,” he says. “The cows get full quickly and they clear the area completely.”

Protein levels can increase because cows are eating more dry matter. Mr Ridge feeds 4kg a cow of concentrates to push yields, but would be doing this during normal grazing conditions, too.

He recommends splitting larger fields into 12-hour grazing blocks, otherwise cows will trample and muck on the grass.

In a dry spell he reckons it is a highly effective means of slowing down the rotation.

At this time of the year he aims for a 20-day rotation. Cows aren’t able to select the leafy grass and are forced to eat the whole of the grass plant, much of which would go to waste if the paddock was topped.

By using a non-conditioning mower set at 3.5-4cm – higher than it would be for silage – it mirrors the height cows should have grazed the pasture to.

When mown too closely the field can burn off in hot, dry conditions and stunt re-growth, but neither should the mower be set too high. “It needs to be low enough to take out the rubbish. This means you get a clean, fresh sward on the next rotation,” says Mr Ridge.

The grass is cut at midday, when sugars are high. Mr Ridge doesn’t cut too far in front of cows, usually less than 12 hours ahead, to prevent them spoiling the grass.

The technique is seen as useful when the grazing plan has gone wrong and can be used on some grazing fields which are too far in front, but not ready to silage. Mr Ridge has a high level of clover in his swards as a result of running an organic system and says topping prevents the fields getting too lush, with the consequential risk of bloat.

Some farmers also use pre-grazing mowing when the grazing round is getting tight, using it when there is a gap between silage being cut and it being fit to graze again. Alternatively, it is used when growth has dropped below demand and fields have been shut up for cutting.

Mr Ridge says mowing means he does not worry about forcing cows to eat every blade of grass when the weather is bad at the beginning of the season. “I know I will be able to tidy it up in the summer when it is dry enough,” he says.

Short of forage and wondering what the best alternative winter feeds are this year? Check out the options at this year’s Dairy Event and Livestock Show at the NEC, Birmingham, on 7 and 8 September. For more information see www.fwi.co.uk/dels2010