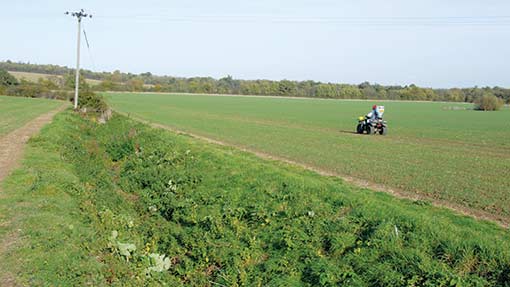 Growers have been told that the fate of metaldehyde is in their hands as a new pilot scheme was launched to reduce the levels of the slug killer in drinking water sources.

The most popular active ingredient for slug control is highly soluble and very costly for water companies to remove from extracted water to ensure it meets drinking standards.

It has been under serious threat since the European Water Framework Directive (WFD) came into force in 2000, which is designed to protect and improve all water bodies including surface and groundwater, estuaries and coastal waters.

In 2008 the Metaldehyde Stewardship Group (MSG) was set up in response to the active being a repeat offender and attempted to engage with growers and agronomists and urge them to use metaldehyde pellets wisely to reduce the risk of water pollution.

The latest industry-wide initiative involves the MSG, major water companies, the Environment Agency and pellet manufacturers and has identified the most “at risk” water catchments for metaldehyde pollution from leaching or run-off.

Within those catchments, the fields most vulnerable to those sources of pollution will be assigned as voluntary zero-metaldehyde “red zones”.

Heavy clay soils with under-drainage are the highest risk and other considerations include gradient and the field’s proximity to watercourses.

See also Ferric phosphate could be lifeline in slug battle

Within “red zones” growers will volunteer to use only ferric phosphate-based pellets to control slugs, which is now the only alternative after methiocarb was banned.

Previous work by MSG has already achieved up to a 50% reduction in metaldehyde detection between 2008 and 2012 – both wet years with high slug pressure – in some vulnerable catchments.

NFU plant health adviser Don Pendergrast told a recent MSG press briefing that it shows what can be achieved by engaging with growers rather than going down the regulatory route.

“That reduction shows that farmers can make a difference to the future of metaldehyde and it is not just a box-ticking exercise, so the opportunity is there,” he said.

Two catchments out of the 88 “at risk” from metaldehyde pollution nationally have been singled out for the initial pilot.

They were chosen for their differing characteristics, with the Avon and Leam a more rural catchment encompassing around 280 farmers with a mixture of grassland and arable.

The Mimmshall Brook catchment is in close proximity to urban areas and predominantly arable land and a critical water source for an Affinity Water abstraction station that supplies a large population in north London and Hertfordshire.

It is home to eight growers and two of them, Alistair White and Andrew Gray, have entered into the voluntary scheme, which kicked off in January this year.

Mr White was keen to be involved from the start and is willing to change his approach to slug control to help keep metaldehyde for use in the future.

“Under the pilot I won’t be able to use metaldehyde on 65% of my farm, but that is better than 100% if we don’t act to try and prevent its loss completely.

“It is not going to be too impractical to switch pellet type and once you have calibrated the spreader once, it’s a two-minute job,” he said.

Mr Gray, who has 90% of his 120ha in “red zones”, told Farmers Weekly that his biggest concern was wheat after oilseed rape and he believes that if he can’t keep on top of slugs, he might have to stop growing rape altogether.

“Slugs weren’t much of a problem before we started growing the crop and if we had to take it out the rotation it would be a big blow,” he added.

He is also concerned about the recent loss of methiocarb , which made up the trio of slug-killing options previously available to growers.

“We used it in the really high pressure year of 2012, so now I have just ferric phosphate across 90% of my land to control slugs.

“That could add pressure to supplies, which could pose a problem where we are trying not to use metaldehyde,” said Mr Gray.

ProCam agronomist Tom Scotson, who advises Mr White, is confident that the pilot will prove the correct way to go to reduce metaldehyde water pollution in key catchments.

“Providing we get growers to co-operate, which we have predominantly got at the moment, it has to be to the right thing to do.

“We don’t want to lose yet another important active ingredient to British agriculture,” said Mr Scotson.

The scheme will be expanded to two further catchments in the Thames Valley and Anglia Water regions before autumn 2014 and if successful, it’s hoped it will lead to an effective strategy that could be successful on a wider scale.