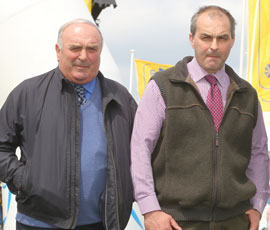 Mention milling wheat and most will think of the midlands and East Anglia. But this year’s Nabim/HGCA milling wheat farmer of the year is putting Co Durham on the quality wheat map.

Stephen Craggs (pictured right), with his father Ray, has grown 750ha of continuous milling wheat for about 30 years on their farm in Co Durham and last year achieved 8.16t/ha. Some years he has averaged more than 11.5t/ha.

But this year, 200ha of the area was spring wheat Tybalt because of the wet winter preventing them from completing winter drilling. Typically 90% of the crop meets full milling specification.

Grower Pat Thornton, who was one of the judges, says Mr Craggs’ commitment to the milling sector was clear from the outset, growing continuous wheat for milling in far from ideal conditions.

“With an understanding of varietal suitability and a very simple approach of establish it, feed it and keep it healthy, the business has consistently delivered quality milling wheat to merchants and millers over a number of years.”

He has invested significantly in large modern machinery especially drilling and cultivating equipment to stop being caught out by adverse weather. “Sea frets are a fact of life and can be very disruptive.”

Mr Craggs describes wheat growing as challenging. The climate makes for cold slow seed-beds and he relies on ploughing to invert colder surface soil. The other impact of the poor climate is the need for high seed rates.

His wheat goes to ADM as well as independent miller EB Bradshaw and sons in Driffield.

Nick and David Philp grow 700ha of milling wheat in the Thames Valley near Reading, selling most direct to Heygates.

Tips on sampling and monitoring your grain