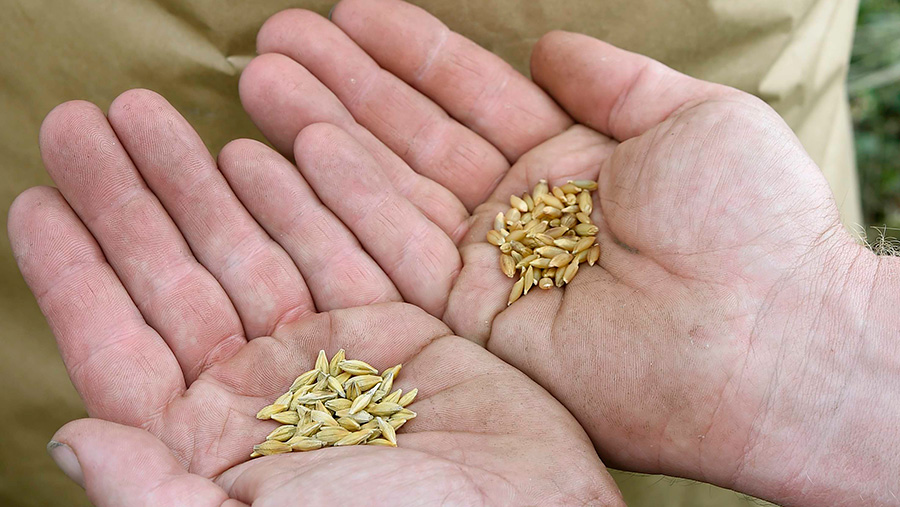 The first significant crops of naked barley in decades have been harvested on three farms in the east of England as part of a project to develop a new niche market for cereal growers.

The project is being led by natural ingredient company Edme, with support from William Hudson of specialist ingredient supplier Hodmedod.

“Its flour and flakes can be used in breads, cakes, biscuits, pastries and breakfast cereals – enhancing nutritional value as well as adding flavour.”

Unlike malting barley, in which the husk adheres to the grain and plays a vital role in the brewing and distilling process, with naked barley the husk drops off during harvesting, making it suitable for human consumption.

“The grain still has its bran layer and is still packed with goodness,” said Mr Hudson.

“In addition to the vitamin and mineral content, barley grains have a low glycemic index.

“They are also said to have three times the beta glucans (for breaking down cholesterol) of oats.”

The partners are working with the John Innes Centre in Norfolk, experimenting with 120 different types of grain in small trial plots.

But Gengel naked barley has reached the production stage, and has been grown on farms in Essex, Suffolk and Lincolnshire.

While the partners are confident the grain has a future, and anticipate a keen demand from bakers, they insist the project is still in its infancy.

“We want to avoid a situation where farmers rush in to grow it and that forces the price down, as has happened in the past,” Mr Hudson told Farmers Weekly.

“It does not yield especially well, so needs a price that reflects its nutritional value.

“It’s certainly an interesting crop – one that tolerates wet weather and needs less N,P and K.

“But the market needs to be developed carefully, or else it may become just another commodity.”