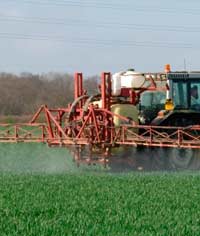 New formulations using nanotechnology could help either boost activity or reduce doses of agrochemicals, a researcher in the field has claimed.


Many organic pesticides had a low solubility in water making them difficult to apply in water, Steve Rannard of IOTA NanoSolutions explained at the British Crop Production Council congress.

That was overcome by a number of different methods in existing formulations, such as dissolving the active ingredient in a solvent or emulsion or grinding it into such small particles it formed a suspension or dispersion, he said.

But both methods have drawbacks, particularly in the use of solvents, which is under increasing regulatory pressure, while grinding only works on active substances that have high melting points.

“We’ve been working on a technology that allows a particulate dispersion without grinding,” he said.

That dissolves when put into a spray solution dispersing the nanoparticles into the solution. “They won’t dissolve but form dispersions that behave almost like solutions.”

Nano-dispersed formulations have a number of advantages, his colleague David Duncalf explained, including improving performance, and reducing packaging waste and shipping costs, as well as not containing any solvents.

In trials with a “world-leading” fungicide, which the firm wouldn’t name at the conference, its new nano-dispersal formulation had shown far superior fungicidal activity than the commercially available formulation, he said.

“On fungus-inoculated agar plates the commercial formulation starts to lose control at 0.1% and gives no control at 0.01% dose. The plates are still fungus-free at 100 times dilution with the nano-solution,” he claimed.

In greenhouse tests a quarter dose of the new formulation gave the same level of performance as full rate of the commercial product, Prof Rannard said. “It gives the chance of enhanced efficacy with the same dose, or equal efficacy with a lower dose.”

The new formulations could be on the market in a couple of years, he hoped. “We have ongoing relationships with some big companies. We’re not trying to develop our own products but rather partner with experts.”