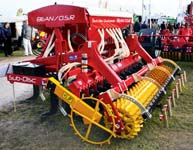 Beans need to go deep into a tilth – relative to other crops at least – and many growers reckon that tines are the best tool for putting them there. So why not adapt an implement already built to work with deep-working tines?

That is the thinking behind the latest version of the Weaving Subdisc, a mounted and newly-trailed machine from Worcestershire-based Weaving Machinery that combines subsoiling and surface cultivation elements.

Up front there are two rows of low-draft subsoiler tines, followed by a row of serrated discs of the type commonly seen on fast, shallow-working disc cultivators. A Güttler cast prism ring packer completes the package.

In its new seeding guise, the Subdisc also gets a hopper and Accord-type metering and air distribution system, designed mainly for sowing beans and oilseed rape.

For beans, all the distribution head outlets are used to feed Siamese seed tubes positioned close behind each of the forward-curved subsoiling tines. Seed drops to the appropriate depth and is then covered by the action of the discs that follow.

For oilseed rape, half the seed distribution outlets are blanked off and “splash plates” are used to broadcast the seed. They can be positioned either ahead of or behind the ring packer according to preference – placing seed in front of a packer ensures good seed:soil contact but more even sowing depth is reckoned by some to be achieved by placing it behind.

On trailed versions, the disc gangs are suspended from bridge links that attach the packer roll to the main frame so that hydraulic cylinders can be used to independently alter their working depth.

A large-volume, low-speed air system and a new seed distribution head said to deliver new levels of seed spacing consistency are among features of the Xeos family of piggy-back drills from Sulky.

Developed to replace the current Optiline range, the Xeos family comprises three models – the MD and HD with a choice of Suffolk and regular disc coulters, and the Pro, which comes with heavy duty notched disc coulters for sowing into mintill seed-beds.

A universal metering unit is installed at the base of the hopper with a hand-set drive shaft clutch switching between large and small seed metering rollers. A low-speed 180mm fan draws air through a large diameter filtered inlet with the aim of generating a big volume of air, but low noise levels.

Seed and air are mixed in a ribbed tube feeding the distribution head, which is located outside the hopper and lacks any “bounce zones” that otherwise would disrupt the fluid flow. Tests at a DLG facility in Germany show very little variation in seed spacing, even with sensitive cultivars such as peas and oilseed rape.

Individual flap covers make row spacing changes quick and easy, and Sulky claims the design is immune to air flow variation that in other designs can result when different outlets are open or closed.

The Xeos Pro, equipped with heavy duty sowing discs, comes with electric metering roller drive as standard (it is also available on the HD), which allows the operator to manually adjust seed rate in 10% increments using the Sulky Pilot controller supplied by RDS Technology.

It also allows half-drill shut-off from the tractor cab and for the system to be charged for easier sowing from headlands.

Growers using min-till and plough-based crop establishment systems need no longer compromise on the type of cultivator drill they use, thanks to the re-working of Lemken’s Solitair 8 seeder to fit both power harrows and the Heliodor compact disc cultivator. 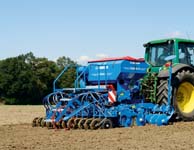 Lemken’s Solitair 8 seeder can now piggy-back on the Heliodor high-speed disc cultivator as well as a power harrow.

Few drills are equally suited to both systems, suggests Lemken. While non-powered cultivator drills have much to offer in terms of higher forward speed and lower operating cost compared with a power harrow-based machine, trailed cultivator drills often struggle when drilling late on wet ploughed land.

The Solitair 8 has been engineered to mount on a power harrow or the Heliodor so that the best combination can be used for the soil type, timing and prevailing conditions.

There is a choice of consolidation tools for both the Zircon power harrow and Heliodor cultivator, which can be equipped with paddle-type levelling tine heads of two rows of 465mm discs. These are individually mounted on single-leaf spring-steel carriers to follow contours at speed, while also providing damage protection.

Hydraulic on-the-move working depth adjustment is a new option on the Vaderstad Rapid A 400S, enabling operators to achieve the best setting for good establishment in fields where soil type and condition varies significantly.

The hydraulic system is self-compensating, in that with every lift, the system self-calibrates to ensure the centre frame and wing sections operate in unison. Settings can be made with 1mm accuracy, says Vaderstad, with the main cylinder locked in position by double hydraulic valves.

A new metering and distribution system – Fenix II – and a cushioned rubber mounting for the coulter assembly feature on the second-generation Spirit disc drill for light to medium soils.

The Spirit Next’s corrosion-proof metering system is designed to deliver seed consistently, even at very low rates of less than 1kg/ha. Metering is controlled by a powerful electric motor and a shut-off flap makes it possible to work on the seed house with a full hopper.

Adding Vaderstad’s Biodrill to the Spirit Next, which is priced from £52,920 with the System Disc cultivation element, allows ley and catch crops to be sown at the same time as cereals.