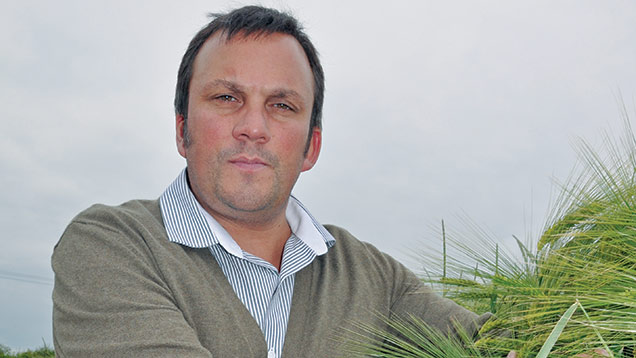 Hybrid barley is about to take a step forward with two new six-row varieties set to give winter barley yields a boost, says the plant breeder Syngenta.

“After an absence of a few years, our new hybrid barleys are being put through the RL system again.

“There have been some changes to the protocol for testing barley, which we believe will allow the hybrids to demonstrate their true potential. So we’ve re-entered them,” he says.

If successful, the two varieties will join the group’s existing hybrid Volume on the RL.

Currently, both have yields of 108, giving them a 2% advantage over their stablemate, which was first recommended in 2009.

Seed of both varieties will be available this autumn, and the earliest they could enter the RL would be this December for the 2016-17 list.

“Volume has been the highest-yielding barley variety on the List for the past seven years. In that time, there have been plenty of good new varieties added, but none have been able to beat it for yield,” Mr Taylor-Alford adds.

All-round disease resistance is another feature of both Bazooka and Belfry, demonstrating progress in hybrid breeding.

With no obvious disease weaknesses, Bazooka’s rhynchosporium rating of 9 suggests that it would be a good choice for the wet West, with Belfry’s brown rust rating of 7 giving it an advantage in the East.

“At first glance, they are difficult to differentiate. But Belfry is 6cm shorter and has a more erect growth habit,” he says.

Grain specific weights are better than previous hybrids, with the varieties scoring 68.7kg/hl and 68.0kg/hl respectively.

Both also have early maturity and good lodging resistance, making them easy to manage on farm.

Farm-scale studies with hybrid barley have shown yield benefits over conventional barleys of 0.85t/ha over four years and in dry springs the advantage has been higher.

The 2014 growing season suited all barley, with much smaller differences between hybrids and conventionals being recorded last year as all barley grew well.

His colleague, Jamie Marshall-Roberts points to the rotational benefits of hybrid barley.

“We’ve seen remarkable suppression of blackgrass where hybrids are grown – not just with the number of blackgrass heads but also in the size and health of the heads,” he says.

This work is ongoing, but there appears to be much lower seed return, making hybrid barley part of an integrated rotational solution, he adds.

New data on its performance against blackgrass will be available later this year.

Yield benefits in the following oilseed rape crop, from its early establishment after barley, are also apparent.

“There are workload management advantages too. The spray timings for Hyvido are earlier and harvest is at the end of July,” he says.

Does it stack up?

The higher seed costs associated with hybrid barley won’t be changing for this year, despite the challenge of lower grain prices.

“There is an initial cost outlay. It’s around £60/ha more for the seed than with a conventional feed barley,” says Mr Taylor-Alford.

That means the establishment costs for hybrid barley are £119/ha, compared with £60-65/ha for conventional crops.

However, he calculates that Hyvido varieties will give additional return, from their higher yields.

“It may be less than in previous years, at around £26/ha, but it’s clear that yield is still key for profitability,” he says.

In addition, the cashback yield guarantee will continue to run, offering growers the chance to re-coup the additional seed cost if hybrids fail to outperform conventional barley by 0.5t/ha.