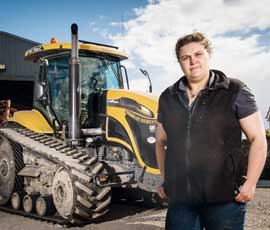 Ireland’s cereal yields are some of the highest in the world so alarm bells ring when you are unable to get your wheat crop in the ground, and this is exactly what happened to our new Barometer farmer Jane Smith.

Irish weather is typified by bursts of rain and sunshine, allowing tillage (arable) growers in eastern Ireland some of the best opportunities to get a bumper crop, despite only making up 9% of the total agricultural land in the country.

Eight years ago, Mrs Smith largely grew continuous winter wheat on her farm. However, 2013 has failed to see any winter wheat sown, with winter barley, spring barley and spring oats being relied upon this year.

“It was the first year in my living memory that we haven’t had any winter wheat sown.

“It was really due to two major factors: the weather was obviously very poor meaning it was hard to get on the land and prepare the seed-bed in time. Then there was such a limited availability of seed and what was available was of very poor quality,” she says.

In previous years national yields ranged from 8.6t/ha to 9.8t/ha something which is vital in sustaining businesses such as Mrs Smiths and making the lack of wheat this year one of biggest worries on the farm.

“The fact that we’ve got no wheat in the ground this year is a concern. You only have to look at the price of wheat to know its one of the highest margin crops.”

The tumultuous weather, seen in the past few seasons, has been the catalyst for most problems experienced on the farm and Mrs Smith admits it can be hard finding ways of dealing with it.

“The last couple of years have not been great weather so you prioritise and get on where you can.

“It’s tough because you can get everything right but if the weather is poor there’s not a great deal you can do,” she explains.

Mrs Smith highlights the grains didn’t even grow last year in the wheat due to low temperatures and severe rain with neighbouring county Carlow experiencing 163.1mm in June alone.

The rainfall is vastly different throughout Ireland, dictating where much of the tillage land is. Further West in County Mayo, they received 230.1mm of rainfall in June 2012.

The high yields of wheat do not come easily to Irish growers, as Mrs Smith well knows. The wet weather is conducive to high disease pressures, something that is growing problem in Ireland according, to Mrs Smith, with fungicide resistance on the rise.

Mrs Smith takes an active role in making all the decisions on the farm including the agronomy.

“I share my agronomy using my merchant (distributor agronomist) so I’d say it’s about 50/50. I like to be as up to date and involved as possible, so I’m always speaking to friends who are independent agronomists and then I also use our merchants.”

Whilst septoria and fusarium are the main concern on the disease front, it is sterile brome that heads the problems with grassweeds for Mrs Smith.

“It seems to have been more prevalent over the past few years. It’s not as bad as the disease pressures but it is certainly a problem”.

Oilseed rape also plays a big role in the rotation helping with bumper wheat yields, although Mrs Smith has had mixed success with this crop in the past.

“We often grow OSR and get reasonable yields and obviously it acts as a good break crop, however we’ve had much less success with spring OSR”

Three years ago, about 81ha of spring OSR was sown but this equated to a drawn out harvest which Limetree Farm could ill afford.

Meanwhile last year the 24ha of winter OSR was sown, but struggled to yield 1t/ha, which Mrs Smith attributes to an extended flowering time from February to May.

“Disease pressure was very high and the frosty nights can’t have helped. Saying that, it’s the first bad yield we’ve experienced and the following wheat yields are always fantastic,” she explains.

This year’s lack of wheat has lead to increased spring cropping with most taken up by barley and oats and it is something Mrs Smith highlights does have its benefits.

“Spring oats were in fact one of the success stories of last season and do fairly well. We got about 2t/a using the variety Barra. We’ve got that again this year with most of it drilled mid March.”

Mrs Smith completed her Nuffield scholarship on ‘the incorporation of organic matter in the prevention of soil erosion’ in 2007, underpinning her credentials as a forward thinking farmer.

This has also helped her continue to focus on soil management. Mrs Smith has placed a much greater emphasis on soils on her own farm in recent years following the poor weather.

“I think with the weather in the recent years, looking after your soils has never been so important.”

“We need to concentrate on how we protect our soils and that means feeding them, foliar feed or nutrients rather than let the crop take everything.”

To keep soil organic matter levels up, 80% of the straw is chopped rather than baled.

“Our soil is very rich in lime and I would say our Ps would be very good. A lot of it is about thinking long term, which is where min till could come in the future,” she adds.

Machinery has also entered into the dynamic of maintaining soil structure and actually coping with the weather. Recent acquisitions of a Challenger 785 and Claas Lexion combine on tracks have helped reduced soil compaction damage to the soil in less than ideal weather.

“One big thing is it allows you to get on the land when in previous situations you may not have been able to. It’s not just that either, they travel much better and although not perfect leave the field in a much healthier condition,” she explains.

For more on barometer