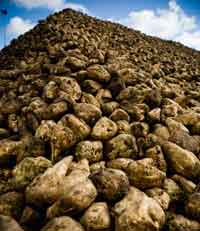 NFU and British Sugar agreed a new four-year contract last month that both sides believe is the breakthrough the sector desperately needs, burying the past and opening up an exciting future.

It follows two years of increasingly difficult and drawn out annual negotiations with NFU and British Sugar taking increasingly polarised positions, leaving growers unable to plan ahead and threatening to boycott the crop.

But will growers accept the new contract? William Martin, NFU sugar beet board chairman, is convinced they will, saying the deal offers a fair return and removes much of the volatility that producers had previously underwritten.

“We believe this is the most progressive sugar beet agreement in Europe leading to greater certainty for growers,” he says.

Karl Carter, British Sugar’s technology director, agrees. “We now have a balanced agreement and a firm platform to prepare for the next round of EU regime reform due in 2015.”

So how does it work? The four-year agreement for the UK’s 7.4m tonnes of permanent beet quota tackles several previously controversial topics, and price heads the list.

From this summer, an annual guaranteed price will be determined by a mechanism running in May and June each year, well before the contracting process starts.

That mechanism has four parts. Direct costs to produce a tonne of beet, including inputs, establishment and harvesting costs, will be determined by independent agricultural consultants.

This will insulate growers from input price fluctuations – for example, if fertiliser rises £3/t of beet, the beet price will reflect that.

The yield figure will be based on the average of the past few years, which have been high, admits Mr Martin. “This will set a benchmark that should help maximise production and efficiency, but because these years were exceptional we have managed to bring the figure back a bit.”

To be finalised in the next couple of months, the figure, will be fixed over the four years, apart from an adjustment should a new outgoers’ scheme skew the figures.

The second part of the mechanism is a fixed figure to cover overheads, based on figures supplied by land agents.

A currency-related adjustment will also be made, isolating growers from what had been a contentious pricing factor. This will be based on forward values for September the following year and reviewed annually.

Finally, a bonus will be paid if the wheat futures price for November year exceeds a trigger point, yet to be determined, but lower than the current agreement. “We wanted to ensure that sugar beet is competitive with mainstream arable alternatives, and wheat is a good barometer,” says Mr Martin.

“We have introduced a real independent element to the pricing mechanism, and all the volatile elements – inputs, currency rate and wheat price – have shifted to the purchaser, making it much easier for growers to plan.”

British Sugar is happy enough with that. “The cost of growing beet is a key issue. If people can’t make money, then why should they grow it?” asks Mr Carter.

Under the old system, British Sugar was reluctant to cover, for example, rising fertiliser prices because it knew it would be difficult to get it back if the trend reversed. And so it proved.

“The beet price should have gone up £3/t two years ago – we went with £2. And this year we tried to get it back and struggled. So putting it into the model is well worthwhile to avoid any further disagreement.”

Taking on the currency risk also makes sense, says Mr Carter. “British Sugar’s profitability is driven by the euro. Currency was one thing that kept coming at us in discussions with growers last year; they can now get a share of the profits when we do well.”

Growers will get their contracts sooner, too. British Sugar will issue a form of offer and the agreed beet price to every grower during June, and growers will have July to complete and return their offer.

“To have a fixed price when you sign the contract is a real step forward in the current volatile climate,” says Mr Martin. “In the old days you signed a June contract and didn’t know what the price would be until 12-18 months later.”

Although the price of beet on additional contracts (currently about 800,000t for bioethanol production) remains outside the new agreement, British Sugar has agreed to set the price before the campaign.

But all beet, including surplus, will now attract a late delivery allowance, creating a stronger financial incentive to finish the campaign. In a normal year that could double the allowance to £2m, says Mr Carter. “And in a high-yielding year like this one it could go up to £3m.”

Both parties have agreed to devise a simpler approach to replace crown tare sampling. A fixed crown tare adjustment will be set during the 2010/11 season, which will be deducted from whole delivered beet in subsequent years.

“Finally, there’s an end to this dispute in sight,” says Mr Martin. “This will reward growers who top more efficiently – recent Broom’s Barn work has shown an extra 2% could be collected from fields today.”

Mr Carter agrees: “Any yield increases will go straight to the grower and command the full beet price. That will drive yield out of the field and into factories.”

Transport is also due for a shake-up, with British Sugar offering the option of an ex-farm price for the first time in the coming season.

This will be to growers taking part in a voluntary pilot scheme to assess the impact of British Sugar taking on the delivery of the crop to factory.

“If the trial shows worthwhile savings, we will offer to clean, load and transport beet at our own cost or pay the grower what it would cost us,” says Mr Carter.

Mr Martin says an ex-farm option would remove the risk of volatile fuel prices to which growers are currently exposed. “Arranging transport can also be a real headache,” he adds.

While Mr Martin believes most growers will welcome the new contract, there are some who won’t.

“I was keen that there should be an exit route for those growers who think they might struggle under the new agreement. British Sugar has agreed to offer up to £7m so those people can leave with dignity and a bit of cash.”

Mr Carter reckons there are still plenty of people growing the crop because they always have done. “If we can move even more tonnage to the better growers who can produce high yields closer to the factories then that is a healthy place to be.”

But, overall, both men believe most growers will benefit under the new agreement.

As Mr Martin sums up: “I am confident I can grow sugar beet for the next four years and make money at it. So can most other growers. And there are not many crops you can say that about.”