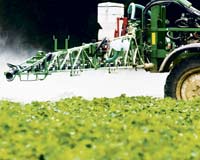 The new strain first showed up near Ipswich in 2005 and has rocketed in prevalence from 38% that year to almost 80% now.

When combined with blight-conducive weather and poor spraying conditions, as in 2007, it can put pressure on blight control programmes, leading to some of the worst potato blight on record.

“Growers need to be aware that we are dealing with a different type of blight these days,” advises Potato Council blight specialist Gary Collins. “It is more aggressive, it is fitter and it will come into crops earlier. So consult an agronomist to ensure you correctly interpret the risk of blight, indicated by Smith Periods, and choose the right control strategy.”

That A2-Blue13 is more damaging is not disputed. PC-funded glasshouse trials show it is the most aggressive strain, creating larger blight lesions and producing spores more rapidly than other strains.

Significantly it can produce spores at less than 10C and the period between infection and sporrulation is far shorter than previously encountered – typically four and a half days for the new A2 blight, compared to six or seven days for conventional blight.

SCRI’s Dave Cooke confirms the rise of A2-Blue13. “The onward march of the Blue A2 blight strain is really quite clear. Genotype testing of more than 1600 samples in 2008 has revealed it now represents 79% of the blight population – up from last year’s 71%. Blue 13 is now dominant across the whole of Great Britain.”

So does that render Smith Periods obsolete? Not at all, insists Mr Collins. “Smith periods are still a very good indication of blight risk. Research so far has compared A2-13 to other strains at two temperatures. It’s enough to show us there’s a change, but not enough to redesign decision support systems.”

Paul Coleman, technical director with potato packer Greenvale, agrees. “Smith Periods still have a valid part to play and the Blightwatch website highlights whether blight has been found in your area and whether Smith Periods and, perhaps more relevantly now, ‘near misses’ have occurred. That helps drive spraying decisions.”

Where blight pressure is moderate start spraying early and adopt a seven-day interval, tightening to an even closer five-day interval under severe pressure, advises Mr Coleman. But he is keen for growers not to over-react.

“We’ve been living with this new strain for three years now. Yes, it is more aggressive, with larger lesions and a marginally shorter lifecycle, so blight management strategies do need to change, but only when conditions are conducive for blight. There’s no need to charge in too early with seven-day sprays when the weather is still dry and there is no risk of blight. Look at the risk factors first,” he urges.

John Keer, who runs field trials in East Anglia, echoes the view that blight is now a different disease. “I see it clearly in trials, where older products, based on phenylamides, mancozeb, Shirlan and the like, are giving nowhere near the control they did 10 or 11 years ago.”

But that does little to change his view of Smith Periods. “I’ve always seen them as rather retrospective. I’d rather look at whether blight is in the area, and Blightwatch is very helpful for that, and then consider the weather forecast. Even today’s better chemistry is still protectant, so protecting the crop ahead of what is coming is what counts.”

So what is the advice for flexing strategies this spring? “Where the threat of blight is high, an early start to the programme may be necessary, and there may be less scope to extend spray intervals,” Mr Collins comments. “Growers should also ensure a good mix of active ingredients in their fungicide programme, particularly being mindful of a more cautionary approach to phenylamide use as recommended by manufacturers.

“It’s now more important than ever to build well-timed applications around a realistic threat-based blight control strategy. Above all, stay alert and report any signs of blight.”