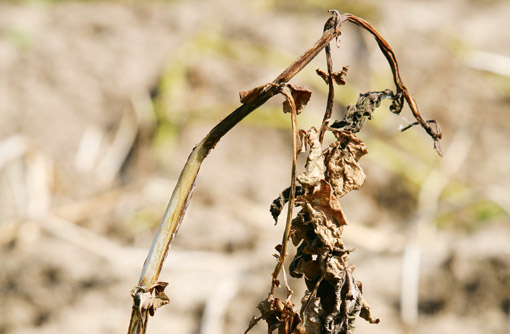 Dutch tests on a new strain of potato blight similar to that discovered for the first time in the UK last year have shown some isolates have reduced sensitivity to the common active fluazinam used to control the disease.

The results from the Dutch trials have, however, prompted experts to remind growers of the importance of following best practice guidelines when using fluazinam this season. The fear is that fluazinam insensitive phyptophthora infestans could become established in the UK.

The new blight strain 33_A2 (known as Green 33) accounts for about 20% of the blight population in the Netherlands.

In the UK, however, it has not been found in commercial crops. “However Green 33 was found last year on a volunteer plant in Norfolk, the risk of finding it this year could be higher specifically for crops grown from seed imported from the Netherlands,” says Ruairidh Bain, potato consultant at the Scottish Agricultural College.

The resistance seen in Dutch isolates is being blamed on the selection pressure from growers using fluazinam as the only active in successive blight sprays, often applying six to eight successive sprays of the straight active to a population that was sexually reproducing.

Growers should consider using flauzinam as a tank mix, according to SAC advice. “This will provide protection by having fungicides with different modes of action and, therefore, reduce selection pressure for any fluazinam insensitive blight,” he explains.

If growers do use straight fluazinam, Dr Bain advises alternating with other fungicides and limiting the proportion of the fungicide programme using the active. “Normal best practice is not to spray 50% of the total seasonal late blight fungicide,” says Dr Bain.

Finally, take all steps possible to avoid the population having significant sexual reproduction by ensuring that rotation length exceeds the period that oospores (produce by A1 and A2 mating) can survive in the soil. Controlling ground keepers and volunteers is also essential.

The advice comes at a time of increasing pressure, due to a drawn out planting season, slow emergence, and subsequent warm and wet conditions.

Crops are emerging and growing unevenly with those plated in the later wet conditions now growing rapidly in warmer temperatures.

“The big problem this year when it comes to controlling blight, is getting the spray on and making sure you use a product which can cover the variation in growth stages cross the crop,” says Dr Bain.

He warns that pressure from ground keepers, tubers left in the soil that can harbour blight spores, will also be higher this year as the lack of frost in the mild winter failed to destroy them.

Key to blight protection will be timely application sticking to a seven-day minimum between blight sprays, at full rates, he advises.

“If growers are concerned there is still to much of the plant un-protected they could also include cymoxanil to get that extra kick-back activity.”