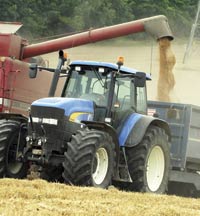 A new bread-making wheat with high yields and consistent quality is a step forward, says breeder.

A new Group 1 milling wheat with little or no yield disadvantage should have tremendous appeal to growers, particularly with bread-making premiums currently £30/t over their five-year average, its breeder believes.

Gallant, from Syngenta Seeds, offered growers a combination of high yield, consistent quality and good agronomics, the firm’s Samantha Smith said at a press launch for the variety.

Yields were higher than almost all Group 2s and many Group 4s, she said. “At 103% of the controls, it is 5% higher yielding than Solstice and 2% above Group 2 market leaders Einstein and Cordiale.”

The yield difference in HGCA trials over Solstice was about 0.5t/ha in real terms, she said. “With a harvest movement price of £115/t, plus a £45/t premium, that would be worth over £80/ha.”

As well as its outstanding yield, Gallant, had also proved consistent in its milling quality, Miss Smith said.

In the HGCA trials its specific weight and protein content were similar to Solstice, with its Hagberg falling number higher at 281 seconds compared with 263 seconds for Solstice.

Hagberg was an important minimum threshold millers use to ensure the dough wasn’t too sticky, she said. The cut-off for milling grade wheat was 250 seconds. “Lower Hagbergs will get the crop rejected and ensure the premium is a lot less – it is harder for the miller to deal with than a low protein.”

In Syngenta’s own trials Gallant’s Hagberg never fell below 250 in three very different seasons for quality. “Over the same period, the mean protein content was above the 13% threshold demanded by millers.

“Significantly, these results were from seven trials each season, fewer than half of which were grown for quality. If they were all grown for quality, I’d expect results to be even higher.”

Gallant was also provisionally rated as a ukp bread wheat for export, opening up alternative markets for growers, she pointed out. “But in addition to quality, it should also be a practical variety for growers in the field.”

In practice that could make it 10 days to a fortnight earlier to harvest in the field than Solstice, she said. “Early maturity is key for spreading harvest workloads, and with a high-[quality bread-making wheat it can make the difference between harvesting the crop safely to protect quality before the rains come, or it still being out in the field.”

It also had other good agronomic characteristics, she said. Its short, stiff straw meant it had good standing power, and a moderate to slow development up to stem extension meant it was also suitable for early drilling from 1 September, she explained.

“After stem extension it seems to have a daylight trigger which speeds development up, leading to early maturity.”

Yields from second wheat trials also suggested it would be suitable in that slot.

The package took milling wheat to a new standard, she suggested. “Previously, milling wheat was always associated with a loss of yield, so it was critical to get the highest milling spec to make up for the loss of yield in premium. But Gallant has all that quality with no disadvantage in yield.”

About 5500t of seed would be available to growers for autumn 2009 planting, Robert Hiles, the UK head of cereals for Syngenta Seeds, said. “That’s enough for 2-3% market share. Potentially it could achieve 8-10% market share the year after, partly at the expense of Solstice, but I also see some of Group 2 market share coming into Group 1s.”

Premiums for bread-making wheat were about £35-45/t compared with the average over the past five years of £18/t, which makes the crop attractive for UK growers, Mr Hiles said.

“The fundamentals are strong, too. We have new markets [such as the new biofuel and Cerestar plants] that are taking a significant volume of wheat from Group 4, which will have some influence on what millers have to pay to guarantee supply.”