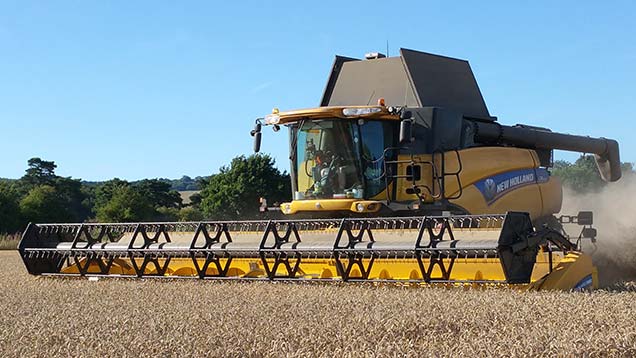 He adds there is little to choose between the two when it comes to breadmaking quality, with both more than meeting milling specifications on his Romney Marsh farm.

Grain proteins for both were in the 13.6-13.7% bracket and Hagbergs over 400. The only minor difference was that the Trinity weighed in a couple of points lower for specific weight at 80-81kg/hl compared with Skyfall at 82-83kg/hl.

“Next year we will be pushing Trinity harder – again in the first wheat slot – on 70ha of heavier ground on Romney Marsh,” says Mr Martin.

“We just feel it is more of a Gallant type and would better suit heavier soils where we can really see what it is capable of doing,” he adds.

This is was the first year for Trinity at Broad Stream Farming, Burmarsh, six miles south-east of Ashford, and it was grown on two small blocks of lighter land following peas, while it is the second year the farm has grown Skyfall.

On the back of low soil mineral nitrogen levels in the early spring, both crops had about 300kg/ha of nitrogen for yield plus an extra 40kg/ha for grain protein.

In a more normal season, applied nitrogen would be closer to 300kg/ha in total, depending on the season and yield potential.

In terms of disease resistance, both varieties had the same fungicide programme, including SDHI fungicides, and focused on septoria control, but the Skyfall required a dedicated mildewicide.

“While we did see higher levels of septoria on the lower leaves coming out of the winter, this never became a problem,” he says.

Both varieties were easy to keep standing with the farm utilising a split Moddus and chlormequat programme topped up with a 2-chloroethylphosphonic acid product at T1.

Combining was a relatively slow process, purely as a result of the big grain and straw yield.

Looking forward to next year, the farm will be growing Trinity, Skyfall, Crusoe and Cordiale along with a trial block of the new breadmaking wheat Siskin from KWS, which is hoped will make the new AHDB Recommended list later this year.