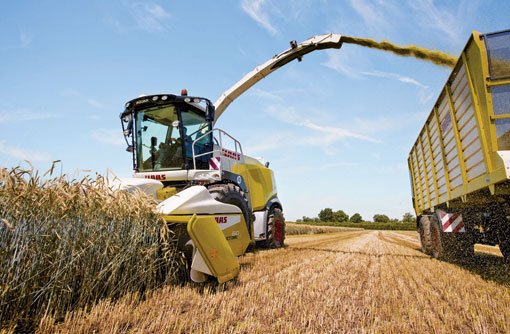 Think of growing crops to feed an anaerobic digester, and maize is likely to be the first thing that comes to mind. But what do you do if you farm in an area unsuitable for maize production, or want an alternative crop in the rotation?

The good news is that breeders are developing varieties aimed specifically at the biogas market – improved “high energy” maize as well as new lines of beet and cereal crops.

The energy production of feedstock crops is the key to maximising biogas production, says Syngenta. “Concentrated power, in the form of high levels of maize metabolisable energy (ME), is the route to optimising performance,” says the company’s Nigel Padbury.

“Maximising the power output from any given anaerobic digestion plant capacity relies on the amount of readily available energy going into the system. Essentially, more megajoules in equals more power out.”

Maize remains the largest feedstock crop in Europe and KWS estimates that as much as 900,000ha will be grown in Germany this year as feedstock for biogas production.

The importance of the market has led the breeder to work on specific varieties of energy maize. “Despite what is commonly said, a biogas plant is not a concrete cow,” says Simon Witheford of KWS.

The key traits for an energy maize variety are maximising yield while achieving a safe level of maturity for harvesting. Trials by KWS have shown a correlation between methane yield and dry matter, rather than starch content. “Energy varieties tend to have greater vigour,” says Simon, which could be important in the UK where crops can experience long cool springs.

Growing a high ME yielding maize variety reduces the tonnage required for any given energy output and thereby cuts the volume and costs of transporting and ensiling the crop, compared to high-biomass varieties, points out Mr Padbury. This improves the green credentials of the overall energy source.

“Varieties grown for biogas feedstock that contain a high proportion of indigestible fibre will slow down the system and reduce its generating capability,” he warns, “whereas growing a highly digestible, high ME yield maize variety can produce more power, more efficiently. Growers must look at a maize variety’s yield of ME per hectare to get the maximum return from the crop.”

Concerns about mono-cropping maize have been expressed both in the UK and on the continent.

“In Germany there is now a 60% limit on using maize for biogas production. Sunflower is difficult to ensile on its own, but it can be harvested and ensiled with maize,” says Mr Eggers.

As an alternative to maize, beet has been gaining in popularity in both Germany and the UK, and KWS has started breeding dedicated energy beet varieties, combining the best characteristics of fodder and sugar types.

“Beet is both high yielding in the field and has a high methane yield,” says Mr Witheford.

An additional increase in gas yield can be achieved by including the leaves, although he feels that the practical difficulties of including this material, such as harvesting issues and the need to ensile it immediately, mean it may not be possible to implement.

Other advantages of using beet include a faster fermentation rate giving higher loading rates in the digester and the fact that a higher percentage of the beet plant can be digested compared to maize. “Whole beet harvesting is definitely the way to go for energy crop production,” he adds.

The first question raised by farmers when beet is proposed as a biogas feedstock is “what about the soil?” – a concern which he feels may have been overstated in the early days.

“With heavier soils and clay soils you can remove a lot using a cleaner loader and as the soil particles are fine they tend to move through the digester into the digestate,” he explains.

“Sandy soils have less dirt tare, but the particles tend to drop out, so you may need to install sand traps or instigate more regular cleaning.”

However, stones must be removed. “If you’re going to do that, you might as well wash it,” he says. This has led to the development of destoner-washers for the crop, designed to be used before clamping.

This is also a key area to consider when investigating the use of energy beet. It is essential to capture the run-off, which can be considerable, as this is a valuable feedstock for use in the plant.

As the beet is not crushed, it respires for the first couple of weeks, but then ensiles and, according to KWS, can be kept indefinitely.

“Ensiled beet works quicker in the digester than fresh beet,” he says, although stressing that energy varieties such as Lissie, will not be approved for sugar production.

Another new crop being introduced for the biogas market is hybrid rye, designed to be harvested as a green wholecrop.

Wholecrop cereals, including wheat and triticale have already been grown as biogas feedstocks in the UK, but hybrid rye is another alternative where maize cannot be grown.

“Triticale is certainly an option for biogas, but is not as high yielding as rye and doesn’t have the same flexibility of sowing date,” says John Burgess of KWS.

In the UK, drilling at the end of October should allow grains to reach the doughy stage in time for harvesting in mid-June and although the new hybrid varieties are shorter than conventional types, will still out-yield the older plants, he says.

“Hybrids also have a greater tillering capacity and, while they can be slow to get going, they grow vigorously in the spring.

“Magnifico is the shortest hybrid we have and while it is a relatively new crop for the UK, on the continent it is extremely popular as it can be sown late after maize.

“It is an extremely secure variety and we don’t expect any lodging problems in the UK.”