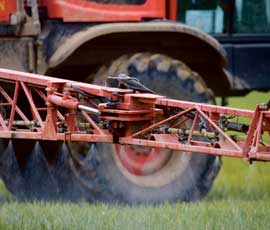 Livestock producers are being urged to follow new guidelines for the application of insecticide chlorpyrifos in a bid to secure the chemical’s future as a key pesticide on intensive grassland units.

The three major approval holders of UK products behind the guidelines – Dow AgroSciences, Makhteshim Agan and Headland Agrochemicals – say they will prevent spray drift and help avoid a ban.

Speaking at this week’s launch of the Say No To Drift campaign, Dow’s ecotoxicologist Steve Norman said that under a routine EU/UK review, the Chemicals Regulations Directorate considered the label-recommended 5m no-spray buffer zones by watercourses for chlorpyrifos no longer provided sufficient protection to highly susceptible aquatic organisms.

“The industry must adopt the new guidelines to give CRD the confidence to renew the registrations,” he said. “The criteria cannot be met by introducing larger buffer zones alone – low-drift nozzles are now a necessity.

“The aim is to achieve 100% uptake of low-drift nozzles and extended buffer zones for all 2012 applications and beyond – we need every producer, sprayer operator and adviser to get behind the initiative.”

Hutchinsons’ technical manager Dick Neale said progressive grassland units could be hard hit by a ban. Frit fly and leatherjackets were key autumn pests in new sward and wireworm was a problem often in the second year of temporary grass leys after grass. “There are not many alternatives – we can use seed dressings for frit fly, but otherwise we would be really stuck.

“Growers plan their re-seeds to get the highest productivity they can. Economically, new swards are key – leaving more old sward in because the risk of losing new sown areas would have massive financial implications.”