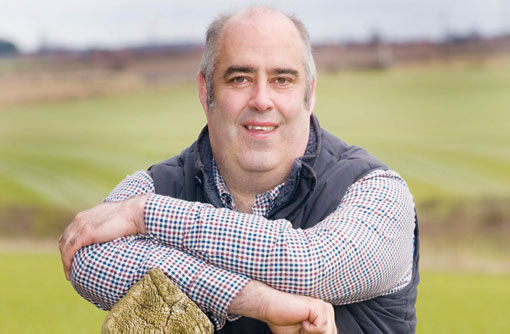 Graham McIntyre’s experience in the fresh produce industry in East Anglia, including the use of irrigation systems, is allowing him to get the most out of the drought-prone light soils he now farms near Edwinstowe in Nottinghamshire.

Born and raised in north-east Scotland, and after studying in Aberdeen, he came to J Bealby and Sons via East Anglia having previously managed a farm in Norfolk. He has the challenge of farming varying soil types across three different sites.

The soils that Mr McIntyre manages are drought prone to varying degrees, and although the potential is there, crops require consistent rainfall.

“Generally, we need 2-3in a month during April, May and June to realise that potential. Last year we had just 2-3in in total over that period, which is reflected in our spring wheat yield of 4t/ha.

“The worry going into this spring is that there isn’t anything in the tank to start with,” he adds.

The limited moisture means that the farm doesn’t use top rates of fertiliser, Mr McIntyre says. “The owner has done his own trials in the past and has seen that applying high rates of nitrogen encourages growth, but that requires water, and the ground just doesn’t hold enough.”

Carrots and leeks are grown in agreement with a local grower and processor and profits are split 50/50 at the end of the season.

Mr McIntyre and his team carry out ground preparations including ploughing, ridging and separating. The contractor comes in with a bed tiller and drill to establish the crops.

“We look after irrigation and spraying through the growing season but harvesting is carried out by the contractor. We don’t have the time in the autumn as we are busy drilling cereals,” says Mr McIntyre.

About 60ha of sugar beet and 160ha of spring and winter wheat complete the rotation around Edwinstowe. Varieties are Gallant and Paragon, and for the first time this year 8ha of Mulika.

“It’s a late autumn or spring-drilled variety, so has the flexibility needed with the roots in the rotation,” says Mr McIntyre. “If it’s a success this year we will save the seed and increase the area next year.”

Mr McIntyre explains that the light land around Broomhill Grange won’t produce high yields, but quality can be achieved consistently. “We never have any problems with proteins, so we go for the milling premium.”

The business owns land on the outskirts of both Mansfield and Worksop, which poses its own set of challenges, with road travel and fuel consumption high.

“We are trying to simplify the rotation for next year, going from a four to a three course rotation,” says Mr McIntyre. “It will allow us to have each crop in blocks and cut down on moves.

“Our combine will cut 10 acres an hour, but it cuts nothing on the road,” explains Mr McIntyre. “Fuel and machinery are our biggest costs, besides fertiliser, so any savings we can make are welcome.”

Last year, the rotation included 120ha each of first and second wheats, winter barley and high erucic acid oilseed rape (HEAR). Second wheats will be sacrificed next year to accommodate the policy change, with 160ha blocks of wheat, barley and rape.

“We will grow feed wheat next year on outlying land and go for yield, which also simplifies things when considering storage,” says Mr McIntyre.

Oilseed rape and wheat are drilled after a 4.6m Simba Xpress, and with roots in the rotation dictating the need for the power harrow combination, Mr McIntyre sees no benefit in investing heavily in a min-till drill.

Sand land around the home farm is ploughed and pressed, with sugar beet drilled straight afterwards as wind erosion can be a problem.

The slightly heavier ground around Mansfield and Worksop is being ploughed rotationally ahead of winter barley and second wheats.

“Blackgrass is not a problem here, but we do have brome, so fitting the plough in the rotation helps to keep levels down,” says Mr McIntyre.

“I’m not anti-min-till, I just feel some people can be too single-minded in their approach. Why not plough rotationally for cultural control, especially when thinking into the future?

“We are in it for the long term as it’s our own land, and even if I’m not here in five years I would like to leave it in a good state.”

Last year, the farm applied poultry manure for the first time, to cut down on artificial fertiliser use and raise organic matter in the soils, which will be a long-term strategy. It is applied with the farm’s Massey Ferguson 8460, equipped with RTK guidance.

The Trimble RTK guidance was originally acquired to ridge leek beds, but is useful to apply the muck accurately.

“Instead of applying artificial 8-20-30 fertiliser on rape in the autumn, the muck maintains P and K. But the smell is an issue around Mansfield and Worksop.

“We don’t spread from Friday to Sunday and everything is incorporated with 12 hours of application,” says Mr McIntyre.

Agronomy is carried out by four separate advisers for cereals, leeks, carrots and sugar beet. Mr McIntyre is BASIS qualified himself, and has recently passed his FACTS exam.

“BASIS is something that will allow me to question recommendations, but I don’t have the time to do an agronomists’ job. I make all the decisions on fertiliser so FACTS will be much more useful,” he says.

“I am only as good as the men below me, and my team is proactive, thinks ahead and communicates well.

“We include them in decisions such as machinery purchases, as they are ones that have to operate that machinery on a day-to-day basis,” he says.

Sugar beet is grown on a 3,000t quota, and Mr McIntyre decided last year to push hard for yield, with current prices for “C” beet bullish.

“We irrigated three times knowing that we would get a return on that investment with the current market,” he says. “The farm achieved an average of 90t/ha.”

One field averaged 105t/ha, however, in contrast another produced less than 65t/ha.

“The field was long and we didn’t have the machine to irrigate it, so it was only watered once late in the season when we were able to borrow a longer reel off a neighbour,” says Mr McIntyre.

“When you are increasing yields by about 30t/ha at £25t, margins are increased by £750/ha, so we will be continuing the policy to irrigate next year as prices will remain the same.”

Sugar beet is something that the farm will review year on year, with the future outlook uncertain and EU sugar regime change imminent.

“Maize may offer an alternative, with it being reasonably drought tolerant and the recent opening of an anaerobic digestion plant in Nottingham, but we will have to wait and see,” adds Mr McIntyre.

After constructing a new grain store two years ago, the farm has recently installed solar panels producing 50kW of power, which will meet the requirements of the store and its elevator system through the summer period.

“At the moment we are unsure of what the tariffs will be from the government, but we wanted to go ahead anyway. Whether it is a five or 10-year payback, we see it as a good investment to meet power requirements,” says Mr McIntyre.

The farm considered a wind turbine, but the planning process is complicated and chances are slim, he says. “It could give us 250kW but would be a £250,000 project, so we opted for the easier option of solar panels.”

“The old dryer used to keep us up all night, so it’s a welcome addition to the farm.

“It requires 110kW, and to upgrade our power source would cost £60,000 so for the first year we will hire in a generator then look to invest in our own for the following season,” explains Mr McIntyre.