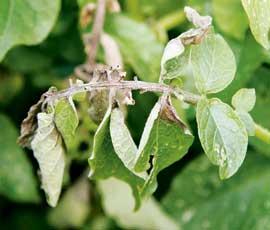 A new strain of potato blight, which could have reduced sensitivity to a popular fungicide, has been identified in the UK for the first time.

The strain “green33” was previously found in The Netherlands.

“How it has arrived is open to debate, but its most likely source was from seed or it travelled via wind across the channel,” said David Cooke of the James Hutton Institute.

“It was found in volunteers in Norfolk quite late in the season so we don’t yet know how widespread it may be.”

“Green33” had shown reduced sensitivity to fluazinam in field trials and increased aggressiveness, although the cause of this was not yet known, said Dr Cooke.

“Fluazinam was less effective against ‘green33’ when compared with ‘blue13’, although that was in a very high disease pressure environment with long spray intervals,” explained Dr Cooke. “It is not yet established, and is still under investigation.”

Instead, an A1 strain known as “pink6” was dominant. It represented over 75% of the 426 isolates tested from that strain. The warm conditions for the main blight epidemic might have favoured that strain last season, Dr Cooke suggested.