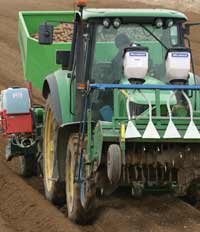 A seminar at British Potato 2009 looks at the implications of a new PCN directive. Mike Abram reports

Extra sampling costs for Scottish seed potato growers and new requirements for sampling farm-saved seed and ware crops are the key potential implications for all potato growers when the new EU potato cyst nematode control directive is implemented next July.

The directive aims to prevent the spread of the pest, which survey data shows infests more than 60% of all potato land in England and Wales.

The Potato Council is working to find practical solutions to ensure that aim is met, while maintaining the supply of land for potato production, Mike Storey, the Council’s head of research and development, says.

There are three key changes to the existing legislation: More intensive soil sampling for seed crops, the extension of the directive to include farm-saved seed and a small-scale sampling of all potato land, including ware crops, for infestation.

Increased sampling of land destined for seed potato production is a result of harmonising sampling regimes across Europe, Mark Prentice of the Potato Council explains. “Historically Great Britain has had quite a low sampling rate, so we’ve got one of the biggest jumps in intensity. The implication is that there is a bigger chance of previously undetectable levels of PCN being found in land intended for seed production, meaning growers will have to find new fields.”

There is also a cost implication for the four-fold increase in sampling requirements for Scottish growers, where 80% of the seed is grown. “The Scottish government has said it will continue to fund sampling to the same level as now, with the extra cost met by industry,” Mr Prentice says. “It hasn’t been decided how this will be done.”

In England and Wales, DEFRA has said it will meet the extra cost of sampling, although a future review will look at charging, Mr Prentice says.

There are also implications for ware growers farm-saving seed, again with differences in interpretation in Scotland and England. For the first time, land used to produce farm-saved seed will need to be tested prior to planting, except where the seed is to be used within the same place of production.

In Scotland that is likely to mean only on the same farm, while in England it could be all holdings owned or rented by the farm business, Mr Prentice says.

Some ware growers will also have fields sampled, as the directive requires 0.5% of the total potato growing area to be sampled each year. That equates to about 500 ha in England and Wales, and 100 ha in Scotland.

Any fields testing positive will fall under an official control programme. In the past this has been quite restrictive, requiring the use of resistant varieties, Mr Prentice says.

“But we’re hoping the new directive will give more flexibility. We need to protect clean land, but also allow ware growers to grow the potatoes the market requires, as long as they don’t multiply PCN to more than the current level the next time potatoes are in the rotation.”