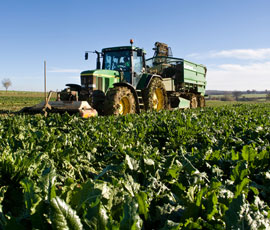 Research results from the 2011 sugar beet campaign have shown a three-spray fungicide programme can provide an adjusted yield benefit of about 18t/ha.

“We know from previous work that employing fungicide strategy is a way of buying back yield due to the physiological benefits, even in the absence of disease,” said Mark Stevens, head of site at Rothamsted – Brooms Barn.

“We have some very good products that keep out a wide range of diseases and I believe that everybody should be using at least one to keep the crop canopy as healthy as possible.”

Previous research using three fungicides had shown a yield drag of 5-8% when the first spray was applied before leaf expansion, leading experts to conclude that the plants require a full canopy before any treatment.

“In the early programme, the first treatment was applied on the 21 June, four weeks before we saw any symptoms of disease in the canopy of the trials. It was then followed by applications in July and August.

“Label recommendations would say to spray at the onset of disease symptoms, but we wanted to see how far we could push the yield,” explained Dr Stevens.

Lifted on 21 November, the three-spray early approach provided a significant 18t/ha, 4t/ha more than a two-spray programme, more than covering the cost of the extra application.

The three-spray late approach was comparable to a two-spray programme when harvested before Christmas, with no significant difference in root weight.

“However, when harvested on 30 January the sugar content was around 1% higher than the other treatments.

“The canopy was also visibly larger, greener and healthier, which could have the benefit of added frost protection as it creates a micro-climate under the canopy, although lack of frost last year didn’t allow us to verify that.”

Dr Stevens is continuing his work this season, with the hope of fine-tuning the current BBRO advice to growers.

“This year the canopy will not be as advanced, so it will be interesting to see the results and whether we will get a similar yield drag that we saw in previous work on early applications.

“If we see the same positive results as last year, there would be a strong argument for getting these fungicides on earlier to get the added physiological benefits,” Dr Stevens said.

Although there have been clear benefits to three fungicides, Dr Stevens urged caution for growers. “It’s only one year and one set of data from one site so it needs more work, but it’s very exciting.

“In the future, we will also look at monitoring rust and mildew spores in the field rather than waiting for the onset of disease to give us an accurate idea of when to apply that first spray,” he added.