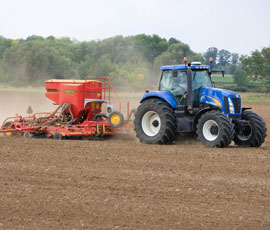 A new insecticidal seed treatment for the control of wheat bulb fly has been approved for use on winter wheat and barley.

Signal, from Chemtura AgroSolutions, which contains 300g/litre of cypermethrin, has given good control of wheat bulb fly in trials conducted by ADAS across a number of sites over several years, outperforming the current market alternatives.

Its recent approval means that it is available for use in 2012 on late-sown cereal crops, giving more choice and greater flexibility with seed treatment use.

As Signal can be co-applied with commonly used fungicide seed treatments, growers will be able to target the fields that are vulnerable to pest attack and reduce the need for foliar sprays, with their associated timing problems, claims the company.

The fact that wheat bulb fly attack can be predicted with some accuracy helps with seed treatment decision making, points out Iwan Jenkins of Chemtura AgroSolutions, who urges growers to make use of egg number assessments and soil conditions.

“Wheat bulb fly is a major pest of England and Scotland, but its numbers fluctuate considerably from year to year,” he says. “Incidence generally increases following a wet harvest period.”

Adult flies lay their eggs in exposed soil in July and August, with the eggs then hatching from January to March in the following year, depending on soil temperature.

“That’s why wheat crops following fallow, potatoes, vining peas, sugar beet and onions are most at risk,” explains Mr Jenkins. “The adult flies are able to land on open soil.”

Where egg counts suggest a high risk of damage, a follow-up spray may be required in addition to the seed treatment, he advises. “The timing of egg hatch also has a bearing. Seed treatments provide an initial period of protection, but there are occasions when egg hatch is delayed or prolonged, or where pest attack is severe.”