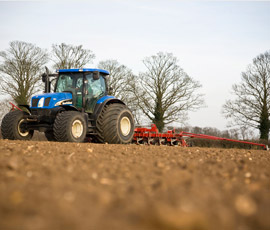 The Recommeded List was showcased on Tuesday (14 May) and includes five conventional varieties, two resistant to beet cyst nematode (BCN) and two with greater tolerance to aggressive strains of AYPR rhizomania.

Trials for the seeds were sown closer than normal at a 9cm spacing and gapped to reduce the number of plots lost each year owing to uneven establishment.

Four of the showcased varieties have been bred and supplied in the UK by SES Vanderhave, while others are by KWS, Limagrain, Maribo and Strube.

The top three varieties on the list are all showcased for 2014. Ranked first is Stingray from SES Vanderhave, which breaks ground as the highest yielding.

With a sugar yield of 102.2% over the 16.6t/ha average, it outperforms Haydn from Strube by half a percentage point.

“We have invested a lot of money to get varieties that are low bolting – which is what we have achieved,” SES Vanderhave general manager Ian Munnery says.

“We are also delivering on yield, rhizomania [tolerance] and consistency, which is what growers are after too,” he adds.

Second on the list is Hadyn – the first sugar beet variety to be introduced by Strube’s new UK company, established last autumn to coordinate sales, trials and research across the four beet factory areas of eastern England.

“We are confident that this is a variety which growers can rely on to deliver value, particularly if we have another tough season,” he says.

Ranked first or second for all the key parametres on which recommended varieties are assessed, Mr Powell says Haydn offered higher yield, lower bolting and higher sugar content than the best of the 2013 varieties.

Third on the list is newcomer Master from Limagrain – a rhizomania-resistant variety combining good establishment habits and a yield of 101.8% of controls.

It offers the best disease resistance of any of the top three varieties, with a score of 7 for rust and 5 for mildew, .

“Its disease resistance will be welcomed by growers looking to spread the spraying workload among more susceptible varieties and those who likely to lift later in the season,” says Limagrain sugar beet consultant Bram van der Have.

Master is likely to appeal to growers with large areas to plant or which found crops performed best when drilled at normal timings, Mr van der Have says. Its high sugar content means it is likely to be popular with British Sugar.

Ranked fifth on the list, new entrant Springbok builds on the success of SES Vanderhave’s UK standard rhizomania-tolerant varieties. It has a sugar content of 18.5%, sugar yield of 101.4% of control, and 167 early-sown bolters per hectare.

The final conventional newcomer is Frazze from Maribo, which is ranked ninth on the list. It boasts a sugar content of 99.7% – lower than existing varieties Cayman, Pasteur and Lipizzan, but higher than established Aimanta, Badger, Columbus and Isabella KWS.

Another SES Vanderhave variety, Mongoose, is tailored towards growers that have confirmed Beet Cyst Nematode infestations.

“It delivers the highest yield available in such circumstances combined with the lowest pf/pi ratio to minimise the increase of the pest,” Mr Munnery says.

At 18.79%, Pamina from Limagrain has the highest sugar content of the five BCN-tolerant varieties on the list.

Its low-bolting performance and good establishment makes Pamina a variety that can be sown over a wide-drilling window.

Sandra KWS is the highest yielding variety in a new category on the 2014 recommended list, specifically recommended for situations where the aggressive AYPR strain of rhizomania is suspected or confirmed.

“With yields outside an AYPR infestation ahead of some recommended varieties, Sandra KWS was probably unlucky to miss out on full recommendation and could be grown on the back of this yield performance alone,” KWS UK sugar beet manager Simon Witheford says.

Sandra KWS is 4.7% higher yielding than Magistral, the other newcomer in the AYPR category from SES Vanderhave. But Magistral – billed as a low-bolting solution for growers, with confirmed AYPR infestations – has 305 early-sown bolters per hectare compared with Sandra’s 574.

Syngenta’s SY Muse variety, ranked fourth on the 2014 list, remains as popular as ever, according to the company. New varieties are in the pipeline, possibly for launch on the 2015 Recommended List.