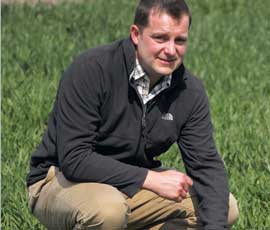 Four new winter wheat varieties from breeder KWS are set to grab nearly a fifth of the seed market this autumn, pushing the group’s market share towards 50%.

Feed wheat Kielder is the pick of the bunch and is set to be snapping at the heels of established feed wheat favourites JB Diego and Santiago.

The German breeder has two other feed wheats, Gator, which performs well as a second wheat, the early-maturing Leeds, and also a top-yielding biscuit-making wheat, Croft, available for this autumn.

“We expect two of our new wheats to be in the top 15 varieties this autumn, which themselves make up around 80% of the market,” says KWS’s UK commercial manager Julie Goult.

Kielder is expected to be the third most popular variety behind JB Diego and KWS’s own Santiago, and Croft is also seen making the top 15, while Gator and Leeds will be restricted by a lack of seed.

Overall, the breeder expects to have seven of its wheat varieties in the top 15 and see its current share ticking up from 45% as its four new ones take share from competitors and its own older varieties.

Despite worries over seed shortages this autumn, Ms Goult says supplies should be adequate, although she suggests booking early for Gator and Leeds where seed is limited.

There is expected to be a big swing back to winter wheat this autumn as sowings were limited last autumn by poor weather, and this is seen as putting pressure on the seed trade.

KWS has cut its yield expectation from seed crops to 6t/ha from a more “normal” 7.5t/ha, but despite this and the expected bounce back in autumn drilling the group is confident about supplies.

“Seed supplies should be in balance, although growers need to order soon for varieties like Leeds and Gator,” she says at a KWS wheat variety launch briefing.

The focus on feed wheats comes as 57% of all certified seed is directed towards this category, although still around half the overall seed market is supplied from farm-saved seed.

Kielder was added to the HGCA Recommended List last November with a yield similar to JB Diego and Santiago. Although it outyielded the two in 2010 and 2011, the variety had a poor year in 2012.

Plant breeder Mark Dodds puts this down to its late maturity being affected by rain, and he expects it to have a yield advantage over JB Diego and Santiago in a more “normal” year.

“We see it as an ideal first wheat with its short and stiff straw, especially on heavy land,” he says.

The variety has a slightly low specific weight than its competitors, and the breeder says this may be a problem with very early sowings, second wheat situations and on light land.

The group’s UK cereals product manager Keith Best sees the variety taking share off JB Diego and Santiago, which have current market shares of about 13% and 12%, respectively.

The breeder sees Gator, which was recommended one year earlier in 2011, to be a specialist second wheat and in this position in the rotation has out yielded other competitors.

Limited seed availability mean it could win a 2% market share with a potential share of 5-6%. Both Kielder and Gator are hard-milling feed wheats.

Its early maturity makes the variety of interest for Scotland, while it also scores well for use in the expanding distilling industry and also the export market, says Mr Dodds.

There is enough seed for a 3-4% market share and this could potentially go as high as 8%, the group says.

The variety has medium straw strength and has shown lodging on some sites, and so may need plant growth regulator treatment, the group says.

The variety could take a 4-5% market share this autumn rising to 6% in later years and so account for one-third of certified seed for biscuit-making Group 3 wheats.

Kielder – A hard-milling feed wheat with a fungicide treated yield of 106% compared with a control group of varieties at 100%, versus Santiago at 107% and Diego at 103%. It has given very high yields but has a low specific weight, is rather late maturing and susceptible to mildew and yellow rust. Entered the Recommended List in November 2012.

Gator – A hard-milling feed wheat with a fungicide treated yield of 104%. It is high yielding in first and second wheat situation and has high resistance to yellow rust, but is very susceptible to brown rust and tends to give lower specific weights. Entered the Recommended List in November 2011.

Leeds – A soft-milling wheat with a fungicide treated yield of 106%. It is very high yielding, good for distilling, can be exported and has a good specific weight. It has above average resistance to fusarium head blight, but is very susceptible to mildew.

Croft – A biscuit-making wheat with a fungicide treated yield of 104%. It is very high yielding and has high resistance to yellow rust, but has relatively weak straw.