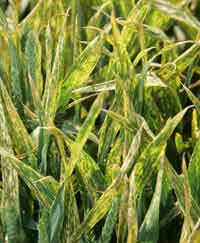 A new race of yellow rust that infects Solstice wheat is being investigated by NIAB.

Samples taken during the United Kingdom Cereal Pathogen Virulence Survey (UKCPVS) last season from the variety have been confirmed as virulent also in seedlings.

NIAB is now testing the isolates on adult plants in the field to determine the level of susceptibility of Solstice and other varieties to the race. Solstice was previously resistant to all known yellow rust races.

“Despite predictions that yellow rust was unlikely to be a problem because of the cold winter, outbreaks have been detected in wheat crops particularly in the high risk areas of the East Midlands and East Anglia,” says NIAB’s Rosemary Bayles. “Reports suggest Robigus and Oakley are particularly affected.”

Robigus is extremely susceptible to a specific race that has dominated the yellow rust population for several years. But Oakley has remained largely free to date, so the appearance of the disease may be more of a surprise to its growers.

But UKCPVS results suggest it is moderately susceptible to a separate race of yellow rust, which although once quite common, has become less frequent in recent years. Unlike the “Robigus race” the types that infect Oakley carry virulence for the resistance gene Yr6, says Dr Bayles.

“Our experience shows that as a variety becomes more widely grown on farm, yellow rust races with corresponding virulence rapidly become more common. We could, therefore, expect to see an increase in Yr6-virulent races in response to increasing area of Oakley, and this would account for the increased incidence of the disease in this variety.”