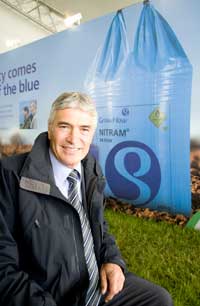 Growers can expect less volatility in the nitrogen market this season. That’s the prediction of a number of experts at this year’s Cereals event.

According to GrowHow‘s Ken Bowler, last season was very unusual – something of a perfect storm.

“All commodities were rising thanks to insatiable Chinese demand,” he says.

“Energy costs headed towards $140 a barrel for crude oil. Rising grain prices and a big boom in US biofuels lead to greater plantings, increasing the demand for nitrogen.”

But then it all changed.

“The high prices caused demand destruction. Cereal prices were falling after harvest. All the hedge funds started exiting commodities such as cereals.”

The credit crisis, he says, affected the price of ammonia for which demand in other industries collapsed.

All this made life uncomfortable for GrowHow which was lambasted by angry farmers who bought early and were now seemingly paying over the odds.

“We had to explain what had happened in the market, but we believe a contract is a contract,” Mr Bowler says. Indeed, he points out that in early 2008 the market situation was exactly the reverse.

So could this rollercoaster be repeated? Mr Bowler doubts it.

“Oil is close to $70 a barrel today. The price is rising but some think oil is overpriced.” Gas, a key cost in fertiliser manufacturing, is linked to the oil price, he points out.

Frontier‘s Stuart Allison agrees. “We would expect a gentle firming of price, probably more in line with the cost of money and the value of storage.

“I don’t expect nitrogen to go through the £200 barrier this side of Christmas.”

So does £178/t for delivery June to August look like a good buy?

“At the moment it’s competitive,” says the NFU‘s Hannah Moule. “The short-term indicators are that energy prices are likely to go up in the winter which is my suspicion why GrowHow have only priced until September.”

“At some point we’ll open up October/November,” Mr Bowler responds. “How soon depends on the success of this early campaign.”

Farmers must stay calm, Mr Allison adds. “They need to select the right products for their rotation rather than panic just because prices are cheaper than expected.”

Early indications, however, suggest the price is tempting. “Our belief is that the majority of the June to August supplies have been committed.”

Mr Bowler agrees there has been a lot of interest.

But while the price could be at its cheapest for the season, Miss Moule says some growers need convincing buying early is the right strategy. “Farmers are still angry with GrowHow.”

The current offer is a good suppressant it seems.

Could GrowHow abuse its dominant position of having over 40% of the UK’s nitrogen market? Make up your own mind.

“We’ve been monitoring the continental market,” says Miss Moule. “To date GrowHow have not priced above the market. They are under such scrutiny that I don’t think they can abuse their position.”

Making the most of your nitrogen means making sure your soils have the right P and K status.

“Last year was the lowest P and K use for 25 years,” says Mr Allison.

Many growers took P and K holidays he says. That combined with last year’s high yields which increased P and K off-take means growers need to think even more carefully this season.

“The lower nitrogen price has reduced costs by about £120/ha so the validity of using P and K is much stronger this year than last.”