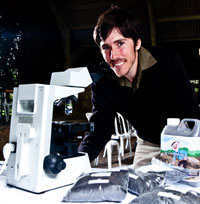 Farmers’ livelihoods depended on soil health, he explained. “Its health is a balance between the chemistry, structure and biology of the soil, and they are interlinked. So you need to think what the impact will be of management decisions on all three.”

Microbes carried out many important functions in a healthy soil, he said. Those included digesting and recycling organic matter, improving soil structure and increasing water and nutrient holding capacity.

They were susceptible to fungicides, fertiliser-rich soils and some herbicides, such as glyphosate, he said. However, avoiding soil disturbance was the biggest benefit to their survival. “Soil fungi, in particular, don’t like being disturbed. Ploughing smashes up the fungal hyphae, so you have to start again.”

The more biologically active the soil, the more carbon it could store, and the greater amounts of nutrients and water it could hold. “And that links to the profitability of your farm.”

Fungi, in particular, were good at building organic matter, storing more carbon in their biomass than bacteria, and helped stick soil particles together, which protected organic matter, he noted. Fungal metabolites and by-products were also more resistant to degradation.

Both fungi and bacteria fed on nutrients released by plant roots, but mycorrhizal fungi attached themselves to plant roots and grew out from the roots by using the root exudates. In return they helped the plant source water and nutrients more effectively.

“They also produce a sticky sugar-protein substance called glomalin, that is very resistant to degradation, and helps improve soil structure,” he said.

As well as carefully managing soils, growers could also think about applying fungal-rich composts and other commercial inoculations to put life back into soils. “They are like probiotics in human health – putting friendly bacteria back into the soil.”

Research was under way into investigating whether specific microbes could be used for specific roles, such as improving disease control or using stubble-digesting fungi after harvest that could make nutrients available faster for the following crop, he said.

“There is potential for specific microbes, but it is a long-term project. Biocontrol can be variable, subject to environmental conditions, and translating it into field conditions is not easy.”