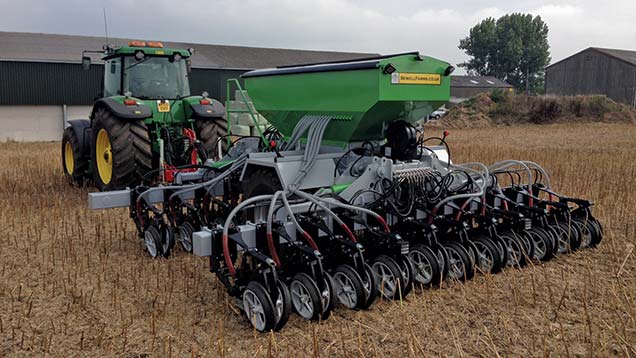 Regenerative agriculture – not just sustainable agriculture – is the aim for a Kent grower as he looks to improve his soils and reduce costs by implementing a no-till crop establishment system.

A recent study by University of Sheffield researchers estimated that UK soils only have 100 harvests left in them, with average soil organic matter content – a good measure of soil health – falling from 8% at the end of the First World War to about 2% in 2013.

This points to a looming crisis for UK growers and highlights the need to change practices to halt the degradation of the agriculture’s most important resource.

Tom Sewell, who farms 405ha near Maidstone, hasn’t ploughed on his farm for 15 years and for the first time this year established all crops with a Primewest Cross-slot direct drill.

With knowledge and global experience gained from his recent Nuffied Scholarship, he believes no-till is part of the secret to improving and unlocking the potential of our soils.

“If the prediction of 100 harvests is correct, then my children’s children might not live to see that last harvest – and that would be a tragedy.

“People elsewhere are embracing no-till and it’s improving their soil organic matter, water retention, water infiltration, improving rooting and soil biology, so why can’t we? Soil improves the less we do to it,” said Mr Sewell.

He also sees the possibility of moving to a longer, six-year rotation in the future to incorporate more cover crops and spring breaks.

“All the decisions on the farm are made by a team of three, including myself, an independent agronomist and a soil adviser.

“Is a soil test more important than a spray recommendation? I think it should be and all the decisions that the three of us make are for the good of the soil,” added Mr Sewell.

Speaking to a gathering of Scottish growers and advisers in Dundee, Mr Sewell was addressing growers who farm in an area famed for intense potato production, where implementing a no-till system would be difficult.

He added that one solution would suit everyone, but it was crucial that the industry started doing more to protect soil health.

“There are cost benefits too and we have sold £46,000 of surplus kit so far, now having a much simpler set up of drill, rolls, sprayer and combine, along with a telehandler.

“We also saved £30,000 a year after letting go a full-time member of staff, who was surplus to requirements,” added Mr Sewell.

Former Farmers Weekly Arable Farmer of the Year Colin McGregor has moved to a reduced tillage system, but he feels a move to no-till might be a step too far.

He operates on about 3,473ha of owned and contract farmed land in the Scottish Borders and north Northumberland, growing a mixture of winter crops and spring breaks, including vining peas and potatoes.

“With no-till you are trying to improve the soil by leaving everything where it is, so where we have vining peas and potatoes, you will be coming along every several years and undoing your good work with the plough,” explained Mr McGregor.

The farm uses the plough for all spring crop seed-beds, but surface tillage during the rest of the rotation with two Case Quadtracs with wide implements to cover the ground quickly and efficiently.

Output of his min-till is 1.23hrs/ha, compared with 3.2hrs/ha of the surface cultivators, making the shallow tillage 62% quicker – a big advantage in catchy weather.

“Machinery depreciation is our biggest cost, so moving to a Cross-slot system could help to cut that significantly.

“However, getting cover crops to work in northern conditions and get the best out of them would be a bigger challenge and we would also need to convince our contract partners to buy into it too,” added Mr McGregor.

The farm has tried some Kings cover crop mix this year on some of its land last autumn to help with soil conditioning, but achieved mixed results.

“We did have some trouble getting the cover crops established and away, but we have learnt some lessons and will continue to experiment with them in the future,” said Mr McGregor.