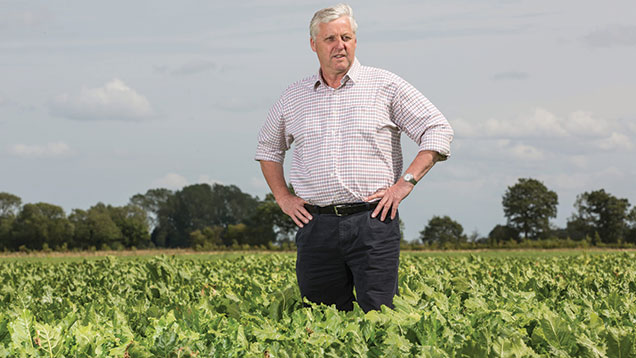 Rotations have returned with a bang to a large north Norfolk estate, surprising everyone with a sharp lift in yields across land where the concept of rotating crops was born two centuries ago.

A six-year cycle of crops was established across the coastal Holkham estate, and within three years yields had rocketed almost 30% higher.

The welcome boost would have brought a wry smile to the face of Thomas Coke, who in the early years of the 19th century perfected his Norfolk four-course rotation on the estate.

Better known as Coke of Norfolk, or more precisely the 1st Earl of Leicester, he lay down the seeds of modern agriculture on his windswept light-land estate.

See also: 3 key problems with arable farming – and how to fix them

The change came with the appointment of Poul Hovesen (pictured above) as the farm’s director at the end of 2011 to manage 2,200ha of arable land, and the subsequent search by his team for a modern equivalent to Coke’s simple solution.

“We were all surprised how quickly the yields turned around. We had expected it might take six years rather than three,” says Mr Hovesen, who is Farmers Weekly’s current Farmer of the Year

The Danish-born director’s philosophy is to put faith in rotations and trust in three break crops interspersed between cereals.

This harked back to Coke’s famous mantra of “No two white straw crops one after the other”, which was the backbone of his turnip-spring barley-grass-winter wheat four-year rotation.

Coke’s turnip crop has been replaced by two root crops – sugar beet and potatoes – with a third break crop oilseed rape thrown in between cereal crops, while a move to grass leys is work in progress.

For Mr Hovesen, many of the problems of modern agriculture have come from too much focus on chemistry and ever-bigger machinery, and not enough on trying to understand the soil.

“The key principles are to look carefully at rotations and cultivation techniques,” he says.

His first move on taking over the estate was to drop carrots and parsnips from the rotation as late harvests were damaging the light sandy clay loam soils, and even the free-range pigs were removed.

The new oilseed rape-winter wheat-sugar beet-winter wheat or spring barley-potatoes-winter barley rotation has only been in place for three years, but the benefits were quick to show.

Oliver Scott, crop production manager at Holkham, says wheat and oilseed rape were the first to see yield benefits in year two of the new rotation.

“The key points were choosing the right crops, improving the timeliness of drilling and better planning,” he says.

The estate stopped trying to muddle in winter wheat after late-lifted sugar beet, since wheat drilled in mid-November yielded no more than 7.5t/ha while malting spring barley averaged 7.8t/ha.

“Late drilling simply does not pay off. You cannot get away with it on this cold, coastal land,” says Mr Scott.

The next move on the estate was to introduce cover crops before sugar beet and potatoes to prevent the free-draining soils leaching nutrients over the winter, and add fertility from grazing sheep on the chosen cover crop of fodder radish.

This season some 80ha of fodder radish was drilled into stubbles the day after the cereal harvest, and with some 40kg/ha of nitrogen fertiliser applied, the crop established well before the winter.

“The soil structure has improved but this hungry light land still needs further improvement,” he says.

The fodder radish is grazed largely by the estate’s 150-ewe Mule flock and 400 store lambs until the land is minimum tilled in the spring before potatoes or sugar beet, and therefore gains valuable organic matter.

The plan is to grow some 500ha of cover crops, all ahead of the two root crops, but the aim is to grow the ewe flock to 400 and introduce grass leys into the rotation.

The other break crop, oilseed rape, receives applications of turkey manure from neighbouring farms and digestate from a nearby anaerobic digester plant.

Expansion is afoot in the potato enterprise, as the soil structure benefits from the rotation have encouraged plans to push the area to 300ha from the present 250ha.

Three-quarters of the potato crop is down to salad varieties, which are harvested in August, again limiting the soil damage that can come with late-lifted crops, while the wide one-in-six rotation means the land is free of the potato grower’s biggest pest – potato cyst nematode.

“Salad potatoes give an excellent entry for winter barley or any winter-sown cereal and leave the soil in a good condition so it can be drilled after just pass with the cultivator,” says Harry Barnett, potato enterprise manager at the estate.

Unable to compete with the high yields on the rich south Lincolnshire silt soils, he is focused on delivering a niche crop to the big supermarkets.

The Coke family knows a thing or two about sustainability as they have lived in the Palladian Holkham Hall since the 1750s. The seventh earl and his son live on the estate and are as passionate about sustainable farming as their illustrious ancestor.

Thomas Coke’s view that crops need to be grown in rotation to ensure nutrients are not depleted and that the soil is treated as a vital tool in the production of better and healthier crop is not forgotten in today’s world of modern agriculture.