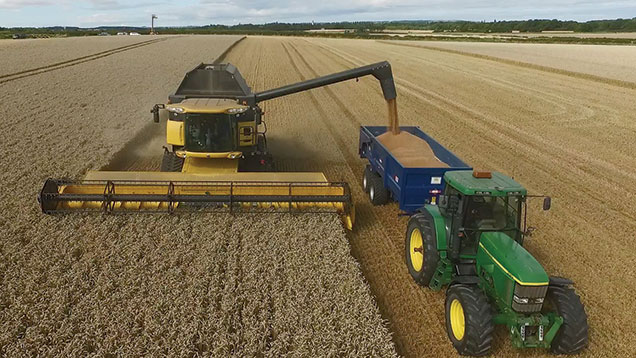 Rod Smith was determined that his world record wheat yield would be grown using a commercial on-farm regime and not by simply piling on the inputs.

His harvested wheat crop of 16.52t/ha was a world beater, but his treatment of this crop largely mirrored other wheats on his deep fertile soils along the north Northumberland coast.

He says the bumper crop was due to a number of factors all coming together – near ideal weather, low disease levels and a variety well suited to his farm.

“All we are trying to do is to get the highest yield with the minimum spend. We knew we had a high potential because of the soil type,” he tells Farmers Weekly.

He added a little extra nitrogen, an extra growth regulator and an added fungicide element over his normal farm practice to achieve the record wheat yield, and still grew a very profitable crop with a gross margin of more than £1,000/ha.

The 400ha largely arable Beal Farm has a history of high yields, with Rod’s father Jim seeing yields of 11.5t/ha some 20 years ago.

Mr Smith looks to improve his soil structure by chopping all his wheat straw, using rotational ploughing at differing depths and is planning to bring grass back into his arable rotation.

Ploughing is used ahead of spring crops such as vining peas, broad beans and spring barley. All barley straw is baled in a straw-for-muck swap with a neighbour.

He points out the weather was favourable for big yields last season with hard winter ground frosts and a dry, cool spring helping to prevent septoria developing.

The paucity of sea frets and plenty of sun helped the crop in the summer, while the absence of very high and very low temperatures limited stress on the wheat.

The crop stayed green well into August, and even when it was cut on 1 September the straw was greenish at the bottom.

At harvest, the farm’s combine showed in-cab yield meter readings ranging from 15 to 23t/ha with the highest yields coming from low areas of the field, which gained extra fertility from nutrients running off from higher areas.

For next season, Mr Smith will be looking to even out some of the yield spikes by using variable rates of some nutrients.

“In the future, we will be trying to push yields up in the 15t/ha areas and limit the 23t/ha yield spikes to try to get a more even crop,” he says.

Mr Smith and his team point out some the factors leading to the bumper yield.

The hard-milling feed wheat Dickens was chosen as it tops the AHDB Recommended List for yield in the northern region with good disease resistance, especially for rusts and mildew.

It appealed to Mr Smith as the variety was early to mature on his farm only 10 miles from the Scottish border – similar to Diego, Reflection and Solstice – and showed strong tillering characteristics in the spring

The variety was the top yielding feed wheat in trials conducted by advisory and distribution group Agrii, where it has consistently yielded more than 15t/ha.

Although the variety did well in northern trials it was not taken up in the north as Scottish wheat variety selection is dominated by soft feed wheats favoured by the distilling industry.

“This is the furthest north we have grown Dickens as hard-milling feed wheats do not generally sell well in Scotland,” says Rodger Shirreff, Agrii’s seed business manager for Scotland.

The wheat crop had an ideal start as the previous crop of broad beans was abandoned because it was drilled late and only produced a thin crop. So the bean crop was disced twice to give plenty of mulch for the new wheat crop.

This operation took place on 12 September, and the ground was subsoiled and pressed before being drilled 10 days later.

The crop never struggled for moisture on Mr Smith’s water-retentive heavy soils, where the fertile clays go down a metre before hitting land drains.

Autumn treatments included Nutriphyte PGA, which is a phosphite product with organic acids that encourages rooting.

A four-way nitrogen split was used with an additional 35kg/ha applied at the flag leaf stage as ammonium nitrate, which differed from the farm’s normal three-split approach.

Agrii agronomist Andrew Wallace explains the strategy was to aim for a yield of 17t/ha. “The idea was to top the crop up at the flag leaf stage to push the crop and keep it green for longer,” he says.

In addition, an extra plant growth regulator applied at the T1.5 timing was to make sure the crop kept standing. The T2 spray timing contained an extra strobilurin to boost disease control and keep the crop green longer.