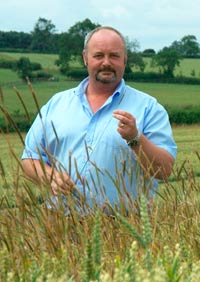 Flat fan nozzles appear to be more effective against yellow rust than air-inclusion nozzles, initial results of a large four-variety, five-nozzle comparison by Agrovista at its trials site at Stoughton suggest.

Plots of Humber, Robigus, Zebedee and Oakley have been sprayed using Proline (0.6 litres/ha) with the five nozzles – a flat fan 110 03, the same nozzle angled forward, a Guardian Air 03 blue, a Billericay BJ03 blue or a Turbo T-jet 03 – at 3 bar using a water volume of 100 litres/ha at a forward speed of 14kph, the firm’s Mark Hemmant explains. “That’s fairly typical practice.”

In each plot water-sensitive paper recorded the spray pattern from each nozzle in the top, middle and bottom of the canopy, he says.

Angling the flat fan nozzle forward improved distribution, particularly at the top of the canopy, he reports. “But the distribution of the air-inclusion nozzles was not as good because of their larger droplet size.”

Worst was the T-jet, which while good at reducing drift, gave a very poor distribution on the lower leaves.

Those distribution patterns have been reflected in the relative control of yellow rust, particularly in the varieties under the highest pressure, Oakley and Robigus, he says. “It appears that getting good spray distribution to start with might be more important for rust than it is for septoria.”

The firm is also investigating whether it can use its adjuvant, Transcend, to improve the efficacy of any of the less effective nozzles sufficiently to be able to recommend their use, he says. “The idea is to take a nozzle that allows you to spray more area in a day and still be able to maintain efficacy.”

In another similar trial using Ennobe (epoxiconazole + prochloraz) as the flag leaf spray the firm is investigating how forward speed as well as nozzle choice affects efficacy.

“The results are intriguing,” Mr Hemmant says. “At 17kph and four-bar disease control from the flat fan is better than an air-inclusion nozzle. But at 2 bar and 10kph it’s the other way round.”