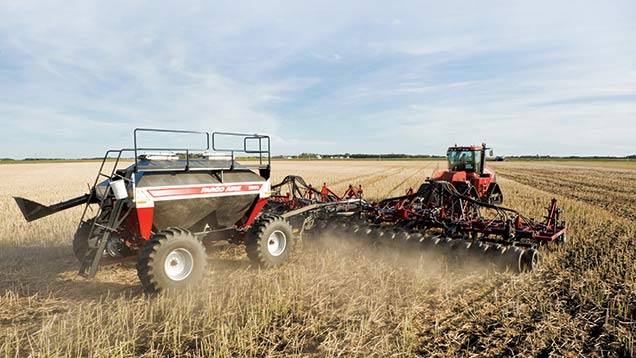 In a Farmers Weekly exclusive, a prominent farm manager summarises the key findings from his Nuffield Scholarship on what his fellow UK growers could learn from other wheat-producing countries in their quest to break through the yield barrier and hit the 20t/ha holy grail

I believe that growing wheat at 20t/ha is achievable in the UK if we make crucial changes to our tillage practices and rotations, and incorporate cover crops and livestock into our cropping systems.

Nobel Prize winner Dr Norman Borlaug, an American scientist credited with the first “green revolution”, stated that to feed our growing global population we have to produce the same amount of food in the next 40 years that we produced in the last 10,000. That is our challenge.

Scientists and researchers are looking for the next “green revolution”, but I feel it’s in our hands to create a “brown revolution” and give our main asset, the soil, the care and attention it deserves.

The current genetic potential of modern wheat varieties is more than 20t/ha, but UK farmers have been struggling to achieve this in the field and the national average is about 8.4t/ha.

This shows the widening gap between the genetic potential and the on-farm yield and I asked myself two questions; what is the cause of this and what practical steps can we take to get closer to that genetic potential?

The challenge I have set myself and one I extend to you is to see how close it’s possible to get to the genetic potential by putting into practice the findings from my Nuffield studies.

My project concluded there’s not one single solution – you need an integrated approach to the whole farming system.

On these pages I reveal the four key areas that came to light on my travels, which took me to Canada, the United States of America, Mexico, New Zealand and Ireland.

1. Use zero-till techniques in the UK and share best practice to maximise its adoption

2. Develop longer, more diverse rotations with the inclusion of grass leys and legumes

3. Plant cover crops whenever possible to protect and enhance soil health and structure

The most fundamental change needed to improve soil health is focusing on zero tillage. The UK has been losing organic matter for 60 years, and losses have increased since the 1980s, with increasingly intense cultivations.

Research shows that across a 15-year period from the mid-1980s there was a 20% reduction in soil organic matter.

This is the engine room that generates nutrients for our crops and these impacts reduce a plant’s ability to use water, capping genetic potential.

Through my studies in the prairie provinces of Alberta and Saskatchewan in Canada and North and South Dakota, Idaho and Oklahoma in the USA, where zero-till establishment techniques are commonplace, these problems are being reversed.

Two identical soil types in Oklahoma (pictured) epitomise the problem and the solution. Only a fence separated them, but over 20 years of zero tillage, the soil has improved and yield potential increased.

The mulch layer also shades the soil surface, keeping it cooler than the bare soil – all key factors when farming in an arid environment.

The traditional summer-tilled soil (left) is structure-less, lifeless and prone to wind erosion; stripping crucial topsoil, nutrients and pesticides from the field.

On the Overbury Estate, we are experimenting with zero tillage and there has been no negative impact on yield, with establishment costs and time halved.

Where it has been used, we are seeing more earthworm activity, fields are draining faster after heavy rainfall and biological activity is increasing.

I believe narrowing rotations revolving around wheat and oilseed rape have led to a build-up of pests, diseases and weeds. A good  example is the increasing inability to control resistant blackgrass.

Breaking the wheat yield plateau in the UK

The Nuffield Farming Scholarship Trust award gives 20 individuals the opportunity to research topics of interest in farming, food, horticulture or rural sectors annually. Scholars are able to travel anywhere in the world, visiting one or more countries to further knowledge and understanding, with a view to advancing their own industries.

Narrow rotations within fields also narrows the population of soil organisms that break down crop residue and release stored fertiliser.

Having a longer and more diverse rotation with winter and spring cereals, mixed with grass and legumes has many benefits.

It also reduces the regularity of identical chemical groups being applied, lowering the risk of pesticide resistance.

Growing legumes will deliver free nitrogen and soil organic matter will improve, and finally it will spread market risk and enable efficient use of farm labour and machinery by spreading workloads.

Although this will mean wheat will feature less often in the rotation, yields of all crops will increase.

An illustration of this diverse rotation was where I visited Mike Solari (pictured below right), who farms in the Southland region of the south island of New Zealand.

He is the current world wheat yield record holder, and has a nine-year rotation including two years of grass and white cover, before seven years of spring and winter cereals and pulses.

I am planning to include a similar grass and clover period across all of our soil types to extend our rotation.

Our third element to combat reduced organic matter, soil erosion, compaction and reduced soil biology can be partially offset with the inclusion of a mixed species cover crop, during periods where land would usually be left fallow.

Across England and Wales erosion moves 2.2m tonnes of arable topsoil every year. This is equivalent to 13mm (half an inch). Cover cropping protects and stabilises the soil, reducing this risk.

After visiting US farmer Jay Fuhrer in North Dakota, the principles of cover cropping became apparent – diverse mixtures of plant species all with unique soil-enhancing benefits, working together.

This process is now fully integrated for spring cropping at Overbury. Cover crop mixes include oats, linseed, buckwheat, phacilia, peas, mustard, fodder radish and turnips. I’ve set up a trial to gain a greater understanding of the benefits of the various mixtures and I’m convinced they can play a crucial role in every arable rotation.

The final piece of my Nuffield jigsaw takes us back to a more traditional way of farming, with the integration of livestock into an arable system helping to reduce damage caused by cultivations and narrow rotations.

Oklahoma, North Dakota and New Zealand demonstrated this integration of corn and horn.

The grazing animals convert forage into more readily available nutrients and reduce the overall bulk of the grazing crop, making subsequent drilling easier. The action of treading in the uneaten crop also aids the improvement of soil organic matter.

Taking advantage of both these techniques at Overbury, we are grazing lambs on stubble turnips, forage rape and oat mixes. Ewes are grazing cover crop mixes during mid-pregnancy, through to late winter, which creates an opportunity to increase the flock size or sell grazing to neighbours.