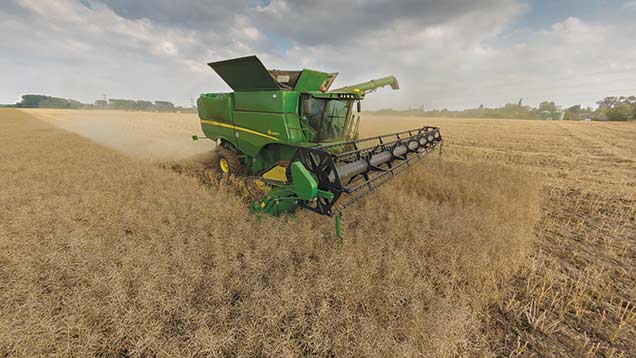 The area drilled to oilseed rape this summer is set to fall, although the decline will be tempered by a small recovery in rapeseed prices.

Leading oilseed rape breeder Monsanto sees a drop in the drilling area to register the fourth successive area fall, but says prices are better than at last year’s harvest.

Seed experts estimate there is an oilseed rape crop of 630,000ha set to be harvested over the next six weeks, and the fall in plantings for next season could be less than 5%.

“There will be a fall in the area, but we believe it will not drop below 600,000ha,” says Geoff Hall, Monsanto’s commercial lead for seeds and traits for north-west Europe.

The group, which expects to maintain its 40% share of the oilseed rape seed market with varieties such as Extrovert and Exalte, has seen some renewed interest in the crop.

The November rapeseed price at about £265/t could be boosted by an oil bonus to take the price above £280/t, and then there could still be a further £20-£25/t bonus if growing a high-quality high-oleic, low-linolenic (Holl) variety.

This could lead to a 250% rise in the Holl variety area for this season, but growers need to have agreed a contract if growing these varieties with a seed supplier.

“The variety V316OL should be able to yield 4.5t/ha, and it has almost sold out for this summer,” he says.

Mr Hall advises that conditions at drilling will be critical, with some soil moisture desirable. Growers should consolidate the seed-bed immediately after sowing.

Hybrid varieties, which make up 54% of the market, should be drilled at 50 seed/sq m or 2.5kg/ha. Conventional seed rates should be 80 seeds/sq m or 4kg/ha, he suggests.

Mr Hall says there is no evidence that increasing the seed rate of hybrids can lessen cabbage stem flea beetle attacks, and it risks producing crops that are too thick.

“A high seed rate without flea beetle attacks would product plants that are too big and reduce light penetration,” he says.

He also reports more interest in Clearfield varieties, such as the group’s Imperial and Impression, which are tolerant to the post-emergence imidazolinone herbicides.

This give growers the option of waiting to see whether they have a viable crop before applying any herbicide, and so can save on any pre-emergence weed killers.

For the future there should be Clearfield Holl varieties to look forward, Mr Hall says.