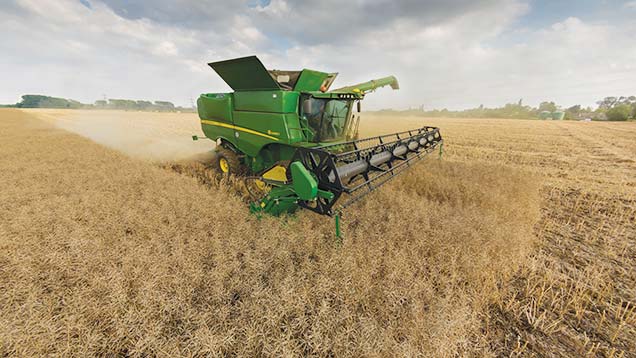 Hybrid oilseed rape varieties with pod shatter resistance could save growers more than £25/t in production costs – which could mean the difference between profit and loss for some.

The leading oilseed rape breeder Monsanto says that the use of hybrids can lead to savings on nitrogen fertiliser and fungicides, while also reducing harvest losses.

With the profitability of oilseed rape currently on an economic knife-edge as rapeseed prices hover around £255/t ex-farm for harvest, these production savings take on a heightened priority.

“These cost savings are nice to have with rapeseed at £350/t, but are vital to the viability of the crop at £250/t,” says Kuldip Mudhar, Monsanto’s north-west Europe oilseed rape project lead.

He was highlighting the benefits of the group’s hybrid varieties, such as Extrovert and Exalte, which give vigorous establishment, good disease resistance and also pod shatter resistance at a briefing earlier this week.

Good establishment gives better and more reliable root and top growth, and crops come out of the winter requiring less nitrogen for an optimum crop canopy.

He argues that the rapid development of the crop can allow growers to save 25kg/ha on their first nitrogen application in the spring, worth £21.25/ha, or more than £5/t for a 4t/ha-yielding crop.

Mr Mudhar adds that the good disease resistance of hybrids to light leaf spot and phoma could mean one less fungicide in moderate disease situations and the use of less-expensive products when disease pressures are higher.

The missing out of an azole fungicide spray, such as prothioconazole, or replacing this with a cheaper azole, such as tebuconazole, could save an average of £24/ha, or £6t/ha for a 4t/ha-yielding crop.

The use of pod shatter resistance varieties can offer yield advantages when the oilseed rape harvest is delayed, according to trial data from crop consultants Niab Tag.

When harvesting is not delayed there is little advantage for varieties with pod shatter resistance, but if harvest is delayed by six or seven days then there is a 6% yield gain from having this resistance.

The trial showed a 0.24t/ha yield advantage for the pod shatter resistant varieties, worth £64/ha when rapeseed is priced at £265/t, including an oil bonus for seed of a 42% oil content.

This translates to a saving of £16/t for a 4t/ha-yielding crop, and this advantage is increased if harvest is delayed beyond six or seven days.

Growers are being urged to look at any measures to boost oilseed rape profitability as the industry benchmark database, the John Nix Farm Management Pocketbook 2015, puts the crop’s total costs – variable and fixed – at £1,000/ha.

Monsanto’s Deryn Gilbey argues this puts a questionmark over oilseed rape’s viability for some growers as yields of more than 3.5t/ha are needed just to cover costs.

The group has about a 40% share of the oilseed rape seed market with its varieties.

“There is a need for oilseed rape to become more economically resilient, so we need to boost its profitability,” says Mr Gilbey, who is the group’s north-west Europe seeds and traits marketing lead.