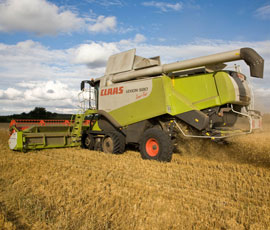 Hamish Forbes still has a third of his harvest to gather at Lockdhu Farm, Nairn, Morayshire, with wet conditions making for slow progress.

“We’re combining today (1 October) for the first time in 10 days – it’s getting really quite serious,” he said.

“Things haven’t been good at all; weather-wise we’ve been completely stuck.”

Of 120ha, Mr Forbes still had 40ha to cut, including 32ha of spring barley and 8ha of winter wheat.

“A lot of the land is quite waterlogged, so travelling is proving difficult.” Yields had been disappointing, with spring barley at about 5t/ha.

“We’ve got Concerto and Belgravia, and the quality has gone – there’s a high percentage of skinning, and nitrogen content has crept up again because of the wet weather.”

Yields were lower than last year, which was surprising on the light land, said Mr Forbes.

But Viscount wheat had been quite pleasing, yielding about 8.6t/ha. “We cut most of it quite early, at 25% moisture.”

Farmers still had a fair bit to combine in the area, he added. “Two to three dry days would make a big difference but we aren’t getting them – one dry day is not enough.

“It’s very late this year – normally we start harvest in the middle of August but we didn’t cut anything until the first week of September.”

Drilling was also behind, although most farmers had got their oilseed rape sown. “We will probably get some winter barley in this week – there’s a lot left to do.”